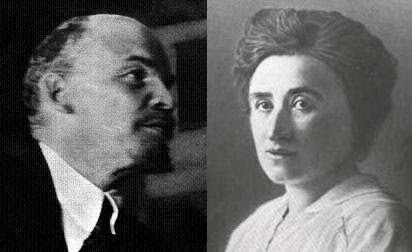 Serve the People - the Communist League of Norway and the Yr Aflonyddwch Mawr in Wales are pleased that vast sections of the working Class in England and Wales support Scottish Independence, but we are conscious that  more support must be won for our Scottish brothers and sisters.

We would ask those undecided to on the issue to take heed of Comrade Lenin's advice to Swedish working class concerning the question of Norwegian Independence.

“What position did the Norwegian and Swedish proletariat take, and indeed had to take, in the conflict over secession?

After Norway seceded, the class-conscious workers of Norway would naturally have voted for a republic, and if some socialists voted otherwise it only goes to show how much dense, philistine opportunism there sometimes is in the European socialist movement.

There can be no two opinions about that, and we mention the point only because Rosa Luxemburg is trying to obscure the issue by speaking off the mark…


There cannot be the slightest doubt that the Swedish Social-Democrats would have betrayed the cause of socialism and democracy if they had not fought with all their might to combat both the landlord and the “Kokoshkin” ideology and policy, and if they had failed to demand, not only equality of nations in general (to which the Kokoshkins also subscribe), but also the right of nations to self-determination, Norway’s freedom to secede.

The Swedish workers… will be able to preserve and defend the complete equality and class solidarity of the workers of both nations in the struggle against both the Swedish and the Norwegian bourgeoisie.”

Long Live The Unity of the Welsh, Scottish, Kernow,  Manxx and Irish Working Class in the Struggle for Socialism in the British Isles and may you always place the fraternity of proletarians above the privileges of the British Bourgeoisie.

What about Tibetan Independence? Or don't they count?

If you are familiar with this site you should know that we take the view that China has restored capitalism.