The Battle for Referendum Democracy in Scotland : 90,000 plus petition calling for a revote has Police investigate Postal Ballot "irregularities" 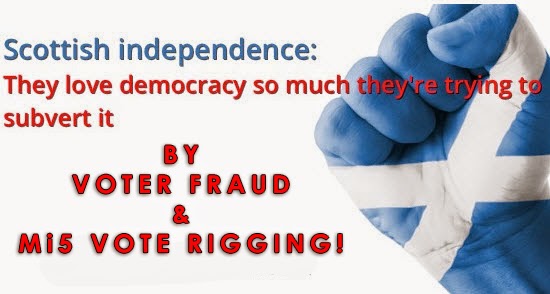 Historic Additional verse of God Save the King/Queen


Lord, grant that Marshal Wade,
May by thy mighty aid,
Victory bring.
May he sedition hush,
and like a torrent rush,
Rebellious Scots to crush,
God save The King


Democracy and Class Struggle says the battle for Referendum Democracy in Scotland may be viewed in England has sedition and the British state may want to crush the rebellious Scots has this verse relates but this is not 1745 but 2014.

Despite the British Media's silence on the "irregularities" in both postal voting and actual voting on the day - the information concerning voter fraud  is out all over the internet social networks - and they will find the Scots a much tougher nut to suppress in 2014 than in 1745.

Here is a report from the Herald of Scotland :

The concerns surfaced after Ruth Davidson, the leader of the Scottish Conservatives, declared 45 minutes after the polls closed last Thursday that the campaign had been "incredibly encouraged" by the results of a "sample opening" of the postal ballot that she said had taken place over the previous few weeks.


She said agents were able to "take tallies" of postal ballots and "the reports have been very positive for us".

It has been confirmed that ­the ­Electoral Commission, the independent elections watchdog, has referred a number of complaints it received to the police as the allegations may be of a criminal nature.

The development comes as the Yes campaign was challenged to accept it had lost the referendum vote instead of sowing division with conspiracy theories and claims No voters were "tricked".

Complaints sent to police and the Electoral Commission surrounded agents being able to see the ballot papers and communicate how the vote was going during opening sessions across Scotland in the days running up to September 18.

The Electoral Commission decided to pass complaints it received to the police after making an initial assessment over whether there was any case to answer.

Agents representing each campaign are allowed to oversee the postal vote opening sessions, where checks are made to verify signatures and dates of birth against records. Elections Scotland instructions on postal votes accept that while staff are required by law to keep ballot papers face down, there may be occasions when the front of the document becomes visible.

"However, it is an offence for anyone attending the opening of postal votes to attempt to ascertain how any vote has been cast or to communicate any such information obtained," it adds.
An Electoral Commission spokeswoman said a breach of the rules laid out in the Scottish Independence Referendum Act 2013 would be "for the police to investigate".

"As such, any complaints we have received in relation to this matter have been brought to the attention of the Police Service of Scotland," she said.

A Police Scotland spokesman said the complaints were being assessed.

A Scottish Conservative spokesman said: "We acknowledge the concerns of the Electoral Commission put to Police Scotland. We will cooperate with regard to any complaints made if asked to do so."

One complainer is understood to have been concerned that information from the votes might have informed Better Together's decision to send the three main party leaders north of the Border and issue "the vow" over extra powers for Scotland.

Footage of Ms Davidson filmed during the referendum coverage has been forwarded to the police and Electoral Commission.

A spokeswoman for Mary Pitcaithly, chief counting officer for the independence referendum, said all ballot papers were kept face down when postal voting packs were opened in the presence of postal ballot agents and observers before polling day to check the personal identifiers - the date of birth and signature - match those held on file.

She said: "All postal vote observers and agents, like everyone else who attends a postal vote opening session, are required to abide by the requirements for secrecy as stated in the Scottish Independence Referendum Act."