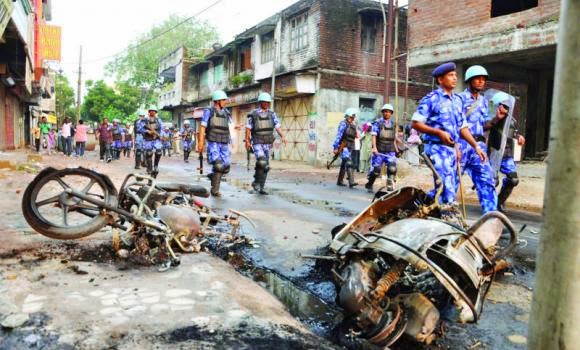 The clashes in the western city of Vadodara were sparked by a distorted image posted on social media that offended Muslims, prompting authorities to block mobile Internet and bulk text messaging, the officer said.

The violence coincides with Modi’s visit to the United States where he is expected to meet President Barack Obama during a trip to push for foreign investment to promote economic growth.

Members of the two communities threw stones at each other and set vehicles alight in several days of clashes that started on Thursday, while one person was stabbed.

“We have now arrested over 200 people from both the communities in the last three days,” said D.J Patel, additional commissioner of Vadodara police. Police said Sunday 40 arrests were made.
“The man, a teacher, who posted the controversial message on WhatsApp has also been arrested,” Patel told AFP.

Patel declined to describe the offending message and image but local newspapers have reported that a distorted photo of the Muslim holy land of Makkah was circulated on social media.

Modi contested and won Vadodara when his Hindu nationalist party swept to power at the general election in May, although he gave up the seat after the polls for another that he also secured.
Gujarat was hit by religious riots in 2002 that left more than 1,000 people, mostly Muslims, dead. Modi, the state’s chief minister at the time, has rejected criticism he failed to stop the bloodshed.