Is there a Scottish Road to Socialism ? A Debate with SSP, Labour and Communist Parties of Scotland and Britain

This debate reflects the variety of views on the Left in Scotland about the question of independence and  Democracy and Class Struggle does not endorse any of the speakers views.

We publish this old debate to provide background to the current Scottish Referendum from a reformist socialist and revisionist communist view and we express our own revolutionary Maoist communist view in opposition to these views.

We think that the speaker from the Communist Party of Scotland Eric Canning comes nearest to the central question, that should be addressed by those interested in a Scottish Socialist Republic namely that of the British State and its smashing which we have addressed here.

The spokesperson for the Communist Party of Britain Professor John Foster has still not reputured from the revisionist Parliamentary British Road to Socialism that emerged in the 1950's which is why they have become increasingly irrevelvant over time not only in Scotland but Britain has an organisation.

Democracy and Class Struggle says that it is delusional if the Scottish Left think that an Independent Scottish Socialist Republic can be legislated through the Scottish Parliament or any other bourgeois institution . 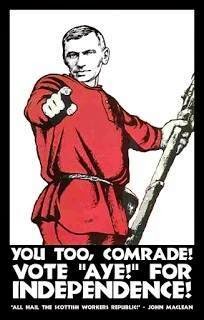