We at  Democracy and Class Struggle politically oppose the Progressive Socialist Party in Ukraine who are pro Eurasian Union and have Pavel Gubarev a Russian Chauvinist has a member.

In fact we completely oppose the ideology of Eurasianism of Alexander Dugin .

However we have contradictions when Right Sector attack offices and members the of Progressive Socialist Party who are part of the People's Movement in Eastern and Southern Ukraine.

Union Borotba in Ukraine calls for release of Pavel Gubarev in this situation when Kiev Putschists are the principal enemy and we agree with them.

The US funded National Endowment for Democracy project Human Rights in Ukraine have dug into the political past of Gubarev to slander the entire People's Movement in Eastern Ukraine and some so called leftists are happy playing the NED  game, while ignoring the fact that Pavel Gubarev is in a coma in prison through a beating by his Kiev captors and ignore the question of the necessity of his urgent release from prison into proper medical facilities.

We have not seen anything from Kharkov based Human Rights in Ukraine calling for release of Pavel Gubarev or enquiring has to the state of his health, something one would at least expect from an organisation carrying the human rights label !

But Human Rights Ukraine is no ordinary organisation but a front for the US/CIA National Endowment for Democracy in Ukraine.

Whilst the current Government of Ukraine is a fascist infested far right government and Banderite to the core but pseudo leftists unremittingly focus on Pavel Gubarev's past to distract from this basic fact.

Fatherland, Svoboda and Right Sector and have already built 22 statues to Stephan Bandera their Nazi hero whose sole ambition in life was to kill Jews and Communists and Poles.

What still surprises us is how enthusiastic the US and British liberal left is to play the NED games in the Ukraine, they are truly puppets on a string whether it is promoting false flag flyers from the People's Movement on their blogs or sites or aiding Human Rights Ukraine an NED front expose one man's politics rather than the politics of the fascist infested far right government and Banderites who control the entire Government and State apparatus in Kiev. 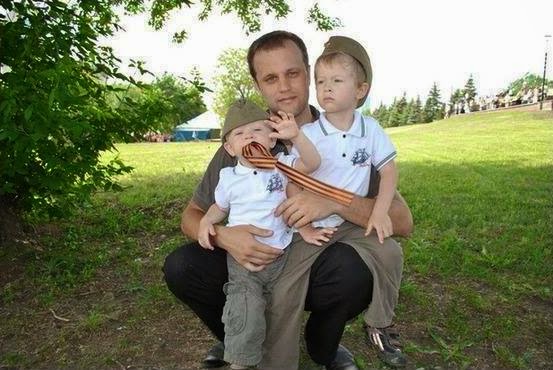 Pavel Gubarev with his family

PS Democracy and Class Struggle will shortly be publishing criticism of Alexander Dugin and Eurasianism and Putinism but our principal responsibility is to expose our own British bourgeoisie's support  for US NATO Imperialism in Ukraine which the above article contributes to.