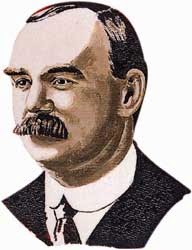 In the Letter to the RIM on May 1st 2012 by the RCPUSA attacks James Connolly for an incorrect stand on the national question.

James Connolly's position was described has extending assistance from one revolution to another and not allowing interference from one party into the affairs of another one.

James Connolly believed that the people on the ground were the best able to understand the line questions and outside parties should not interfere in other parties internal affairs.

The RCPUSA disagrees with James Connolly has it has been interfering in other peoples affairs and parties more times than we can count and think that is their duty.

Interestingly they also indicate in the letter that Mao Zedong was near James Connolly on this point but they said this was one of Mao's weaknesses.

Therefore we assume that Mao Zedong  should have listened to the disastrous advice of the Moscow Comintern reflected in the struggle with Li Lisan and Wang Ming in the Chinese Communist Party has that would have been genuine internationalism and not this old fashioned James Connolly inter-nationalism of nations rather than the bourgeois cosmopolitanism of the RCPUSA parading has proletarian internationalism which we have mentioned before :


PS: The RCPUSA insist despite all the evidence that they are not Post Maoist, with all their corrections to Mao, including on the National Question people find that a little hard to believe except the true believers of course.

James  Connolly's "hold on to your guns in the elections of victory... " acknowledged the difference in the class composition of the 1916 Rising and their consequent conflicting economic and political interests. It was something that revisionists forget today especially the Nepalese revisionists.