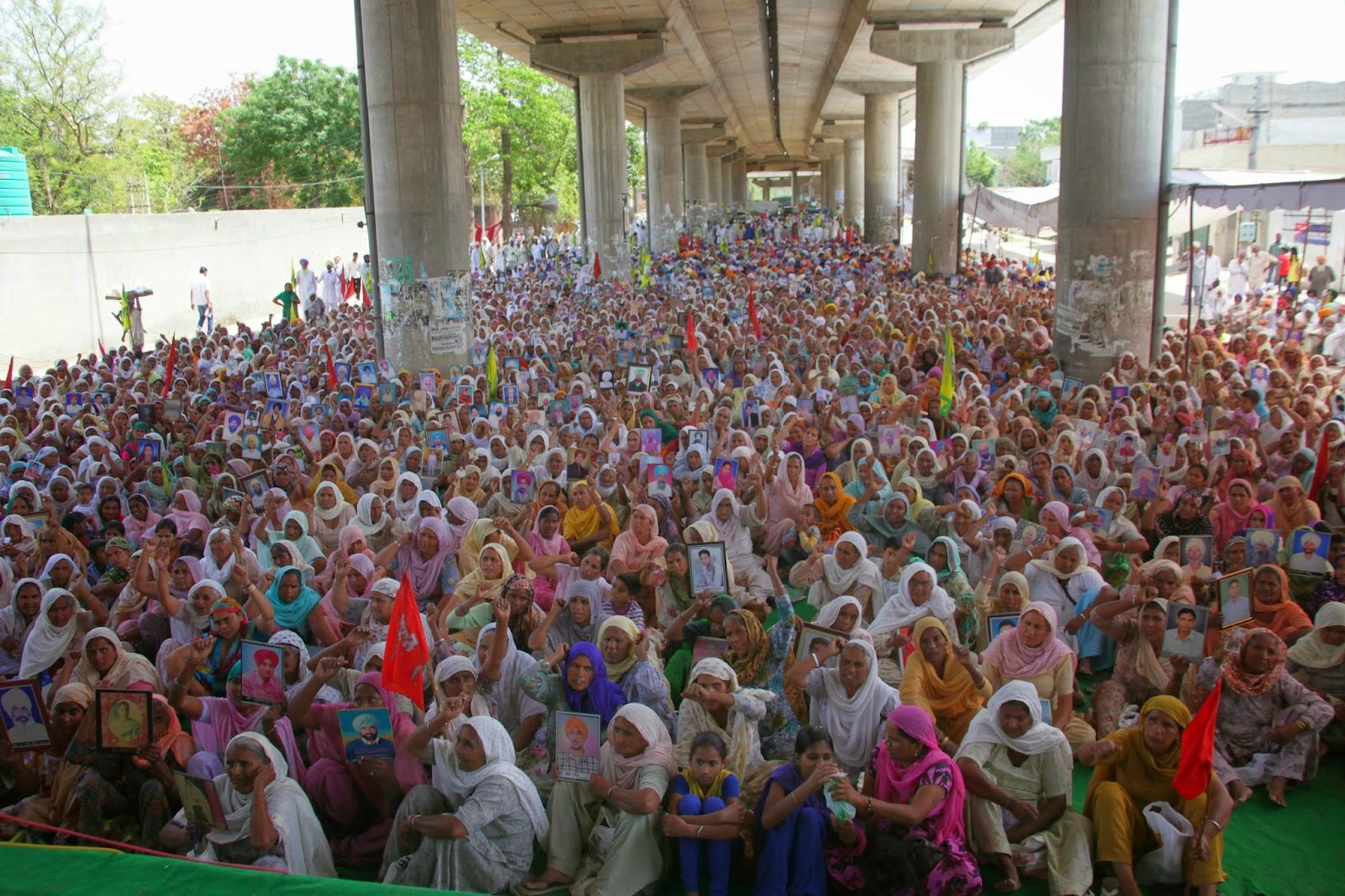 Projecting Revolutionary Alternative in Punjab
On April 26th the city of Bhatinda witnessed a massive gathering of peasants in a meeting at the railway over bridge(near I.T.I.)titled ‘Apni Rakhi Aap Karo’ (protect yourselves and your welfare) organised by the Punjab Khet Mazdoor Union and the B.K.U, Ekta (Ugrahan)  on the topic of the 2014 Lok Sabha elections.

About 5000-7000 peasants assembled from neighbouring villages of districts of  of Bhatinda ,Sangrur and Muktsar  like several streams merging into a river.

It was one of Punjab’s most important gatherings in the last 2 months as it was the 1st state level gathering of revolutionary forces projecting the democratic revolutionary stand on the question of the elections.

Significantly the landless peasants united with the landed in this rally.

It resembled thousands of red lamps being lighting a stadium..It was similar to the revolutionary democratic ‘Pagadi Sambhal’gathering in Barnala in January 2012.

The main theme of the slogans were

1. Not to trust any political party

2. Organize yourselves to build your struggles and build your own organizations

3. Unite with all oppressed sections be it workers, youth, employees or students.

The speakers first explained the peasants how all the development schemes or model plans of states were destructive and conformed  with the semi-feudal, semi-colonial system.

It was explained how feudal development was created and how revolutionary forms of development needed to be built.

The peasant suicides were exposed  and the need to award compensation was demanded .

Progressive legislation for agriculture was also a demand.The implementation of land ceiling act for reforms was put forward as well as re-distribution of waste land.

Significantly in Punjab in the last 2 weeks huge black flag rallies were held in districts all over Punjab in opposition to the tyranny of the ruling Akali Dal government.

These rallies managed to inculcate revolutionary democratic consciousness in the peasantry and make them understand the relationship between their concrete demands and the policies of the government.

It was a perfect sequel to the 7 day agitation for demands in Bathinda in February.

State general secretary of union Lachhman Singh Sewewala said that major political parties have become agents of corporate houses, so they work only for protecting their interests and not to address the issues being faced by the common man.

He said that both the unions have given the slogan of Apni Rakhi Aap Karo (protect your interests  yourself) and will be campaigning against mainstream political parties from April 27 to 29 by distributing pamphlets.

He said that none of the mainstream political parties was speaking on the issue of land reforms and setting up the industry which will generate employment avenues and on the issue of rampant privatisation of every sector.


He said that workers of the unions would urge the people to judge the policies of political parties and caste vote accordingly.

The meetings of Harsimrat and farm activists were at a stones' throw from each other. Heavy police force was deployed in the village to avoid any untoward incident.

"As we wanted to greet Harsimrat Badal with black flags for not listening to our demands, police personnel snatched our mike, sound system and asked us to disperse, but we kept sitting at our meeting point amid a large number of policemen.

While we were stopped from using the sound system, Akali leaders were provided every facility," said Mohan Singh and Jagtar Singh, farmer/labour leaders.

"We will not tolerate this type of highhandedness and will further intensify our protest against Akali leaders till our demand for 5-marla plots and compensation is provided to suicide-hit farm families," BKU Ugrahan district president Shingara Singh Mann said.

However, Akali leaders denied highhandedness on their part against the protesting farmers. Bathinda SSP Gurpreeet Singh Bhullar said, "No mike was snatched but the activists were asked not to create any scene and maintain law and order." Police force was deployed only to avoid any untoward incident, he said.

Arguably in India there have been no organized gatherings as democratic in content on the issue of the 2014 Lok Sabha elections as those staged in Punjab.


Although the  black flag rallies  held at district levels and the gathering in Bhatinda on April 26th were  not quantitatively great,from a qualitative point of view they were a great success.

The organizations responsible refrained from putting up candidates or imposing ‘boycott’ of elections.

The revolutionary class consciousness of the landed and landed peasantry was sharpened.

The Lok Morcha Punjab plans to hold a series of meetings, conventions and rallies exposing the nefarious policies of ruling class parties in the 2014 elections and the need for the broad masses to create their own revolutionary forms of power.

A big agenda and programme has been chalked out in pamphlet printed by the Lok Morcha.It has significance to the whole country.Stress will be placed on creating the roots of democratic consciousness amongst the broad masses.

Information above received from Laxman Singh Sewewala, Secretary of P.M.K.U and N.K.Jeet,advisor to  Lok Morcha, Punjab. 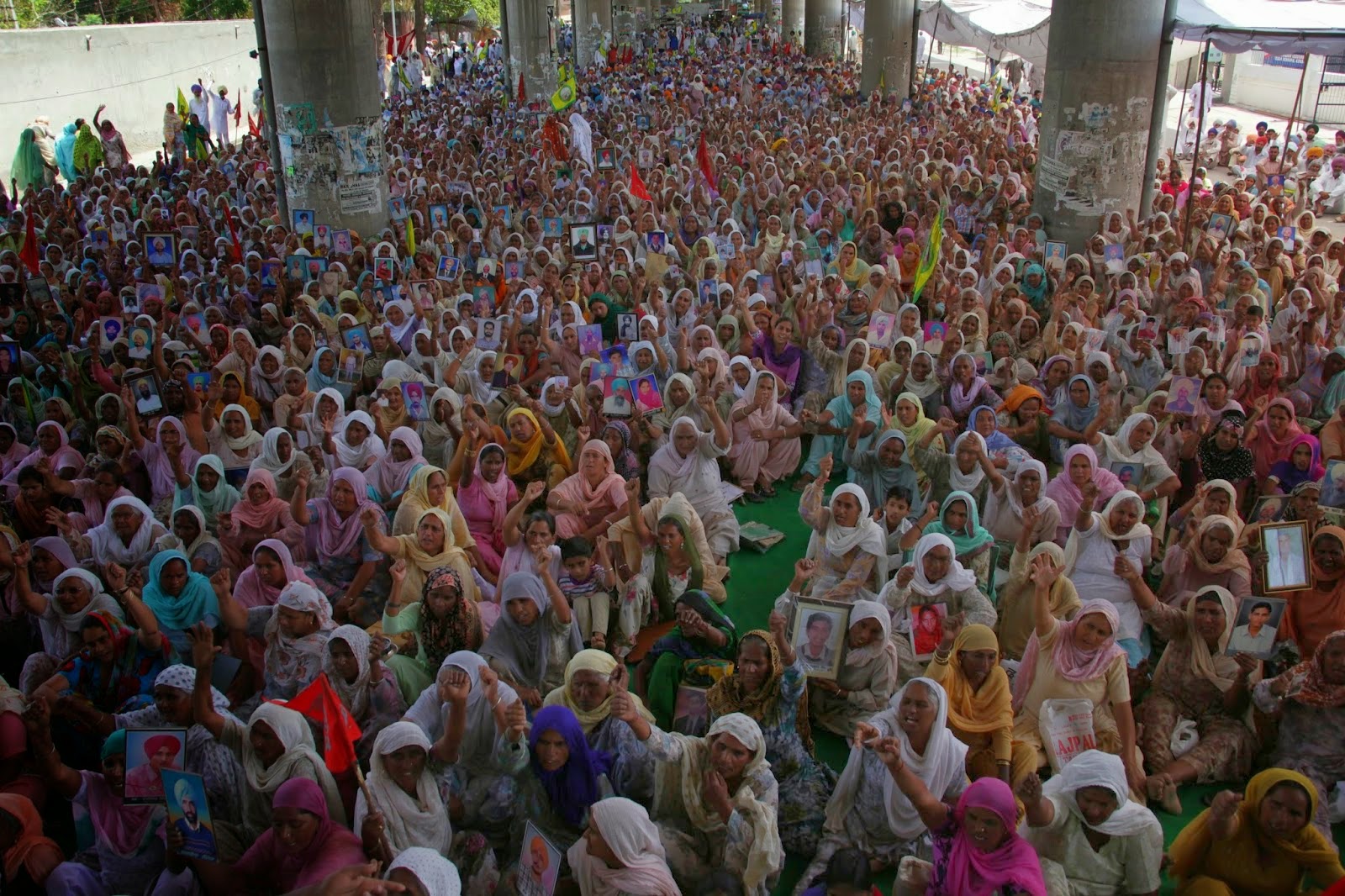