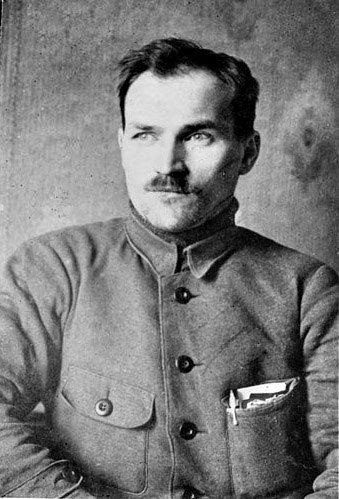 Sergeyev was born in the village of Glebovo, Kursk Governorate, Russian Empire near the city of Fatezh to a family of a peasants. His father Andrey Arefyevich Sergeyev was a contractor to a construction porter, who in 1888 moved the family to Yekaterinoslav.

In 1901 Fyodor Sergeyev finished studies at the Yekaterinoslav realschule. He went on to attend the Imperial Moscow Technical College.

Sergeyev joined the Russian Social Democratic Labour Party and became interested in revolutionary thinking, adopting the nickname 'Artyom',[1] but was expelled after throwing a protest on the school campus.

From 1902 he was a member of the Russian Social Democratic Labour Party, later remaining with the Bolshevik faction of the party. He was a prominent party agitator in Yekaterinoslav, Kursk, and the Ural mountains region.

In 1905 Sergeyev participated in the armed uprising in Kharkiv. In 1906 for a short time he headed the Perm party committee. Sergeyev was a member of the 5th congress of Russian Social Democratic Labour Party after which he was arrested and sentenced to the Nikolayev detention companies, later substituted by an exile to Siberia.

In 1910 he escaped to Brisbane, Australia where he organized the Union of Russian Emmigrants. In 1912 Sergeyev receiving a British citizenship was a chief-editor of "Echo of Australia" and was better known as "Big Tom".

He joined the Australian Socialist Party and was involved in trade-unionist opposition to the first world war.[2] In 1917, after the February revolution, he returned to Russia, becoming a leader of the Bolshevik faction in the Kharkiv council.

In October 1917 he was organizer of a military coup-d'etat in Kharkiv and the whole Donets basin region. At the 1st congress of Soviets in Ukraine he was elected to the Central Executive Committee of Ukraine and later appointed the Ukrainian Narkom of Trade and Industry.

Sergeyev was a chairman of the Sovnarkom of the unrecognized Donetsk-Krivoy Rog Soviet Republic in Ukraine and Narkom of Public Economy. His actions secured the nationalization of industrial centers concentrated in the eastern Ukraine.

Sergeyev became one of the organizers of Ukrainian Central Military-Revolutionary Committee in resistance to Central powers and Kaledin's Cossacks.

On March 27 he organized the Donetsk Army by the order of Vladimir Antonov-Ovseyenko, however by the end of April 1918 that army was integrated into the 5th Army of Red Army headed by Kliment Voroshilov.

Fyodor Sergeyev died in 1921 during the test of the Aerowagon and was buried in the Kremlin Wall Necropolis.