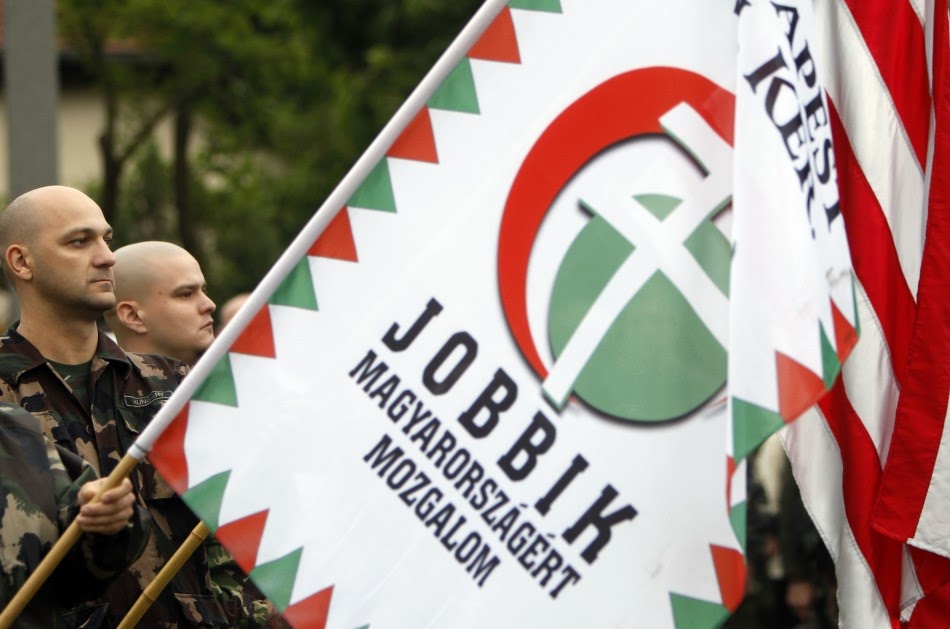 Democracy and Class Struggle publish this article not because we agree with all its content but because it highlights Jobbik - a party requiring close scrutiny by revolutionaries especially their use of Green Nazis ideas..

"Germany was able to accomplish with the EU what it could not accomplish with two world wars" -- Hungarian citizen
The rise of the radical right in Western European countries, particularly in France and the Netherlands, has been a large focus of media attention and scholarly analysis. However, less attention has been paid to the rise of the radical right in Eastern Europe and its links to the anti-austerity and anti-EU movements.

The incredibly successful right-wing party Jobbik in Hungary has been receiving more attention as of late from the media in the U. S., but most political commentators have focused on Jobbik's anti-Semitic and anti-Roma rhetoric and simply dismissed them as contemporary fascists.
While it is important to recognize the scapegoat trifecta in Hungary of Roma, Jews, and homosexuals, in giving the radical right political legitimacy during a devastating economic downturn, simply dismissing them as neo-fascists hides the complexity of the anti-globalization movements and sentiments they articulate.

For in many ways, Jobbik is a microcosm of a larger trend. A similarly nationalist party in neighboring Ukraine, the Svoboda Party, has also recently gained over ten percent of the national vote and is considered a racist and anti-Semitic party as well.

Slovakia's nationalist party Slovak National Party also follows similar rhetoric. All of these nationalist parties in Eastern Europe are focusing on the imperial nature of the EU, rather than the "immigrant problem" that the right focuses on in Western Europe.
The far-right Jobbik Party dominates the anti-EU movement in Hungary. Jobbik is a play on words in Hungarian, meaning both right in terms of direction and "righter" in terms of better. Jobbik party members are the most virulent voices against austerity and Hungary's involvement in the EU. According to Jobbik's English website, the EU is a "colonizing force" that "enslaves the Hungarian people" (Jobbik Party Website). Many people I spoke to in Budapest this fall agreed with Jobbik's assessment that the EU has indeed been a colonizing force in Hungary. Leaders of the party claim that EU has "declared war" on Hungary.
Indeed, many aspects of the EU expansion into Eastern European countries can be seen as a new form of financial imperialism, spearheaded by Germany and Western Europe. Many Hungarian homeowners were encouraged by the Hungarian state and banks to finance their home loans in Swiss Francs. Unfortunately, with the recent devaluation of the Forint, many Hungarians can no longer afford to make payments on their homes or apartments (New York Times). Many local businesses and agricultural producers have been put out of business by the EU's import requirements for Hungary. Numerous Hungarians complained about the fact that most local businesses were destroyed by the EU and lamented the fact that Hungary was no longer a self sustainable country or economy.
The new financial imperialism of the EU is glaringly evident in the Hungarian state's macro-economic decisions. The state was on the verge of insolvency and the current Prime Minister, Orban, had to eventually acquiesce to Brussel's demands in order to borrow an emergency loan package of 25 million Euros to save Hungary from bankruptcy.

Before he did, however, Orban (leader of the center right party Fidesz) utilized very similar anti-EU and anti-Western rhetoric to challenge the EU's austerity requirements in Hungary. Orban compared the EU's treatment of Hungary to the Soviet's treatment of the country and vowed that Hungary would no longer be a colony.
The rhetoric of colonialism resonates with a large cross section of the population. Many young people view their economic prospects within Hungary as abysmal. Large numbers of young doctors are headed to Western Europe, where they can make four times the salary paid to a doctor in Hungary (BBC). Significant amounts of young people are migrating to the UK, Germany, and other areas of Western Europe in order to find higher paying job opportunities.

Typically, these young people end up working within the service and care sectors, which are some of the lowest paid sectors of the economy. Hungarians and other Eastern European people are performing the jobs that many Western Europeans no longer want to do.
So, besides racist rhetoric, how does the right in Hungary utilize ideas of imperialism and colonialism to gain political support? Jobbik promotes policies that include economic redistribution in society, protecting the environment, ending the privatization of farm lands to foreigners, promoting locally produced food that is not genetically modified, protecting water resources, increasing the proportion of green spaces in urban areas, and an overall condemnation of the failure of global capitalism. These policies are meant to increase the strength of Hungary's economy and to lessen its dependence upon the EU and the 'West'. Moving a step beyond financial independence from the EU, Jobbik also promotes turning 'eastward' in its economic policies. The party even goes as far to claim that Hungarians are closer in culture to the East and that is why Hungary should develop its economic relationships with countries in Central and Southeast Asia. These policies are naturally appealing to many Hungarians who have become disillusioned with the transition to capitalism. A large amount of people expected to reach West German and American standards of living within a generation, and have become doubly disillusioned with continuing economic crises, which is one of the major reasons nationalist parties gain political legitimacy.
Ultimately, while Jobbik's discourse surrounding Jewish and Roma populations should be disconcerting to Americans, the more worrying trend should be Jobbik's turn to the 'East'. Hungary was one of the first agitators against Soviet communism in the region and was one of the first countries to end the communist regime. Hungarians looked to the U.S. and the West for guidance and inspiration on the path to democracy and capitalism, and have instead largely become disillusioned with the after-effects of the transition. Instead of analyzing Jobbik's rise in popularity based purely upon fascism and racism, American commentators should also be looking to address why many Hungarians are looking to the East, and not the West any longer, for economic opportunities and guidance.

NB :This article was published at Huffington Post before Fascist Putsch in Kiev
Posted by nickglais on 3/27/2014 07:00:00 AM