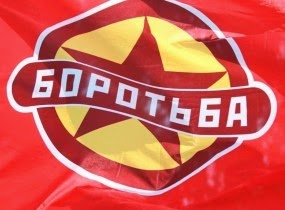 Recent activity by the Kiev junta suggests that nationalist forces are preparing for armed suppr...ession of the popular movement in the Southeast.

Thus, the decision of the Verkhovna Rada to create a National Guard, numbering 60,000 people. The backbone of these militias will be the ultra militants of the Maidan “Self Defense” units. Thus, they get legal status and official permission for the use of weapons against civilians. The National Guard is created with an obvious calculation to use well-trained, ideologically charged nationalist militants to quell protests instead of the police. The Prosecutor General's Office has released the ultra group members captured in Kiev for attempted armed bank robbery, and returned the Nazis’ automatic weapons.

With passive assistance of the Donetsk authorities, Kiev provoked clashes between supporters and opponents of the "one and indivisible" Ukraine. One person was killed. These kinds of provocations are widely used by the junta's propaganda machine to discredit the people's movement in the Southeast. They have become an excuse to enter the region with emergency rule and openly suppress opponents of the ruling coalition and the neoliberal ultras. There is no doubt that protests will be announced and employ imported provocateurs, employing general democratic slogans and attacking pro-Russian nationalists, whose presence is greatly exaggerated.

Preparations for implementation of such a military scenario has already begun -- it prepares the ground for a total propaganda hysteria in the mainstream media of Ukraine. According to anti-fascist sympathizers, unscheduled military rotations have occurred in parts of the Southeast. Forty percent of military servicemen have been replaced with Western Ukraine soldiers, which according to the calculations of the junta can be used to suppress the people. In Kharkiv, they have reconstituted units of the "disbanded" "Berkut" from Poltava and other cities.
Currently, SBU (Ukrainian Security Service) in has conducted arrests of political opponents of the regime in the Southeast.
We have recorded new attacks on leftist and anti-fascist activists, as well as surveillance for our comrades.

Oligarchs are appointed as governors to carry out "pacification.” At the same time, the U.S. government authorized the detention of gas tycoon Dmitry Firtash and is using the threat of prosecutions and sanctions to rally the billionaire thieves around the new regime, who fear for their property and capital in the European Union.

The junta has also asked the United States for military aid. However, the government of the United States refused Kiev "authorities” (for now). Nevertheless, the open support of the new regime on the part of NATO -- including with the involvement of private military companies – means this will de facto be carried out in Ukraine, which will once again become a field of a new imperialist war.

All these facts indicate that the junta is actively preparing for civil war against its own people -- as Association "Borotba" initially warned. The answer all opponents of the junta should be organization and discipline. All out for mass rallies on March 15 and 16.