The Looting of the Ukraine has Began by Paul Craig Roberts 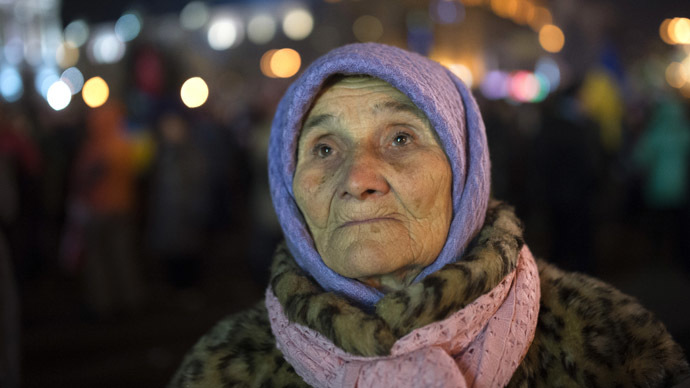 According to a report in Kommersant-Ukraine, the finance ministry of Washington’s stooges in Kiev who are pretending to be a government has prepared an economic austerity plan that will cut Ukrainian pensions from $160 to $80 so that Western bankers who lent money to Ukraine can be repaid at the expense of Ukraine’s poor. http://www.kommersant.ua/doc/2424454 It is Greece all over again.

Before anything approaching stability and legitimacy has been obtained for the puppet government put in power by the Washington orchestrated coup against the legitimate, elected Ukraine government, the Western looters are already at work.

Naive protesters who believed the propaganda that EU membership offered a better life are due to lose half of their pension by April. But this is only the beginning.

The corrupt Western media describes loans as “aid.” However, the 11 billion euros that the EU is offering Kiev is not aid. It is a loan. Moreover, it comes with many strings, including Kiev’s acceptance of an IMF austerity plan.

Remember now, gullible Ukrainians participated in the protests that were used to overthrow their elected government, because they believed the lies told to them by Washington-financed NGOs that once they joined the EU they would have streets paved with gold. Instead they are getting cuts in their pensions and an IMF austerity plan.

Ukraine’s agriculture lands will pass into the hands of American agribusiness.

One part of the Washington/EU plan for Ukraine, or that part of Ukraine that doesn’t defect to Russia, has succeeded. What remains of the country will be thoroughly looted by the West.

The other part hasn’t worked as well. Washington’s Ukrainian stooges lost control of the protests to organized and armed ultra-nationalists. These groups, whose roots go back to those who fought for Hitler during World War 2, engaged in words and deeds that sent southern and eastern Ukraine clamoring to be returned to Russia where they resided prior to the 1950s when the Soviet communist party stuck them into Ukraine.

At this time of writing it looks like Crimea has seceded from Ukraine. Washington and its NATO puppets can do nothing but bluster and threaten sanctions. The White House Fool has demonstrated the impotence of the “US sole superpower” by issuing sanctions against unknown persons, whoever they are, responsible for returning Crimea to Russia, where it existed for about 200 years before, according to Solzhenitsyn, a drunk Khrushchev of Ukrainian ethnicity moved southern and eastern Russian provinces into Ukraine. Having observed the events in western Ukraine, those Russian provinces want to go back home where they belong, just as South Ossetia wanted nothing to do with Georgia.

Washington’s stooges in Kiev can do nothing about Crimea except bluster. Under the Russian-Ukraine agreement, Russia is permitted 25,000 troops in Crimea. The US/EU media’s deploring of a “Russian invasion of 16,000 troops” is either total ignorance or complicity in Washington’s lies.

Obviously, the US/EU media is corrupt. Only a fool would rely on their reports. Any media that would believe anything Washington says after George W. Bush and Dick Cheney sent Secretary of State Colin Powell to the UN to peddle the regime’s lies about “Iraqi weapons of mass destruction,” which the weapons inspectors had told the White House did not exist, is clearly a collection of bought-and-paid for whores.

In the former Russian provinces of eastern Ukraine, Putin’s low-key approach to the strategic threat that Washington has brought to Russia has given Washington a chance to hold on to a major industrial complex that serves the Russian economy and military.

The people themselves in eastern Ukraine are in the streets demanding separation from the unelected government that Washington’s coup has imposed in Kiev. Washington, realizing that its incompetence has lost Crimea, had its Kiev stooges appoint Ukrainian oligarchs, against whom the Maiden protests were partly directed, to governing positions in eastern Ukraine cities.

This is a dilemma for Putin. His low-key approach has allowed Washington to seize the initiative in eastern Ukraine. The oligarchs Taruta and Kolomoyskiy have been put in power in Donetsk and Dnipropetrovsk, and are carrying out arrests of Russians and committing unspeakable crimes, but you will never hear of it from the US presstitutes. Washington’s strategy is to arrest and deep-six the leaders of the secessionists so that there no authorities to request Putin’s intervention.

If Putin has drones, he has the option of taking out Taruta and Kolomoyskiy. If Putin lets Washington retain the Russian provinces of eastern Ukraine, he will have demonstrated a weakness that Washington will exploit.

Washington will exploit the weakness to the point that Washington forces Putin to war.