The Neoliberal Neo-Nazi Coup in Ukraine. The World is at a Dangerous Crossroads


Violence and bloodshed continues to rock Ukraine as factions compete in the power vacuum of last month’s coup in Kiev.

As the country struggles to find its way forward, however, it finds itself in the crosshairs of a US-NATO war agenda that has been unfolding for years.

This is the GRTV Feature Interview with our special guest, Professor Michel Chossudovsky.

“We are not dealing with a transitional government in which Neo-Nazi elements integrate the fringe of the coalition, formally led by the Fatherland party.

Moreover, this is the first full-fledged Neo-Nazi government in Europe in the post World War II period.

This US-NATO sponsored Coup d’etat –which has led to the formation of a coalition government integrated by Neo-Nazis– is an Act of Warfare against Ukraine.

“We have to ask ourselves: Are the architects of this Neo-Nazi government, the people who conspired to install a Nazi regime in Ukraine, are they Neo-Nazis or Neoliberals? They claim to be Neoliberals. They are acting in support of a neoliberal economic policy agenda” (Michel Chossudovsky, March 2014)

“Washington has chosen to spearhead Neo-Nazis into positions of authority. Under a “regime of indirect rule”, however,  they take their orders on crucial military and foreign policy issues –including the deployment of troops directed against the Russian federation– from the US State Department, the Pentagon and NATO.

The World is at a dangerous crossroads:

The structures and composition of this proxy government installed by the West do not favor dialogue with the Russian government and military.

A scenario of military escalation leading to confrontation of Russia and NATO is a distinct possibility.

The Ukraine’s National Security and National Defense Committee (RNBOU) which is controlled by Neo-Nazis plays a central role in military affairs. In the confrontation with Moscow, decisions taken by the RNBOU headed by Neo-Nazi  Andrij Parubiy (right) and his brown Shirt deputy Dmytro Yarosh (below) –in consultation with Washington and Brussels– could potentially have devastating consequences. ” (Michel Chossudovsky, March 2, 2014) 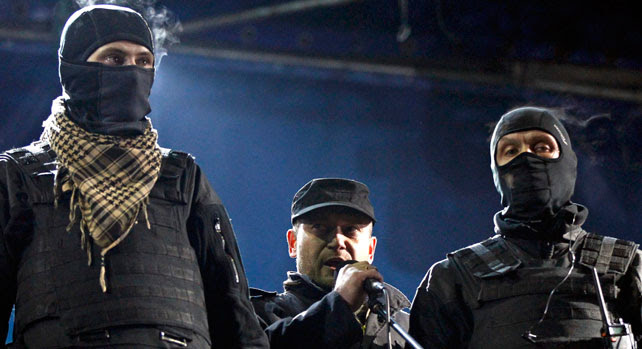