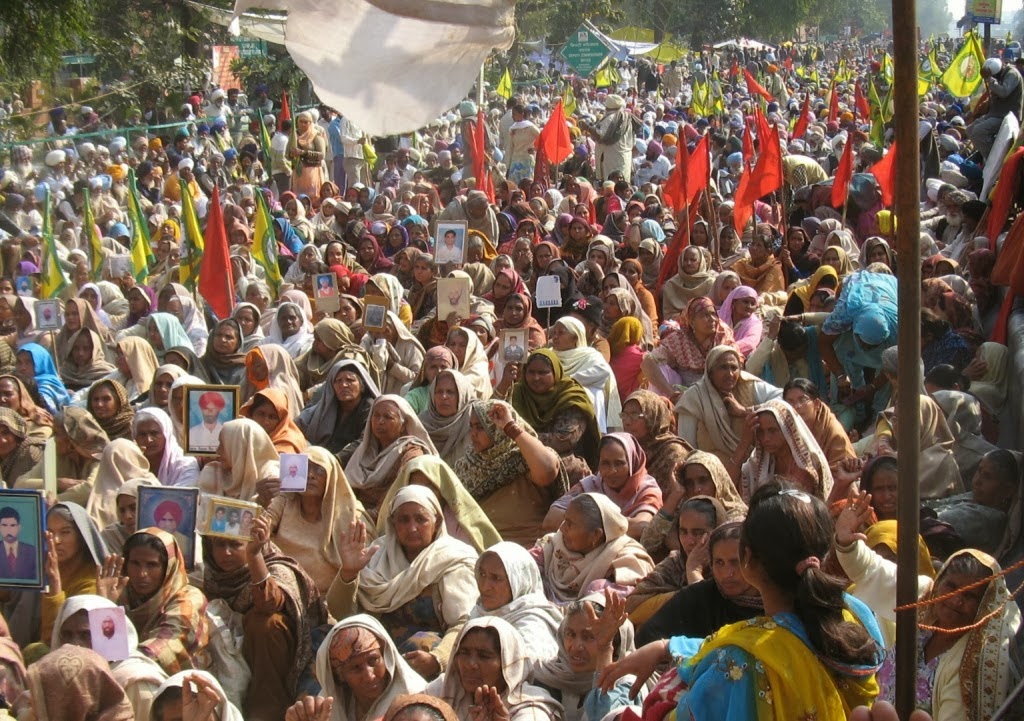 Democracy and Class Struggle has noticed how Peasant Struggles for Land and against debt have become invisible struggles has we have noticed that even in Wales here.
We echo that such heroic struggles should be covered more by the so called revolutionary press and mass media.


In Punjab in the last month the landless and landed peasantry in Punjab literally created a tornado in Punjab.
For 7 days from February 12t to 19th the Punjab Khet Mazdoor Union and the Bharatiya Kisan Union(Ugrahan) besieged the DC'collector's office in Punjab like a swarm of bees.
They displayed remarkable courage in thwarting repression from the police launching protracted resistance with a series of demonstrations.
It was reminiscent of a spark turning into a Priarie fire.
It will be written forever in the annals of the revolutionary democratic movement in Punjab and arguably nowhere in India have we witnessed such a mass upsurge of the peasantry.
What was remarkable was that inspite of facing an official ban their protracted relentlessness forced the administration to allow their protest for demands.
It speaks volumes of the leadership and cadre of these organizations who put painstaking work in redressing the basic issues of the broad peasantry.
Since the dharna finished in Bhatinda on February 19th the struggle has continued in pockets of Punjab, district-wise.
The struggle received support from huge sections of the people.The activists made their own kitchen and even prepared food for the entire team on the streets , without the assistance of women.
This struggle proved the importance of mass revolutionary combat and struggle in a people's movement .
On February 20th government conceded the demand for plots for the landless peasantry but has yet not implemented the demand.
This shows the socio-economic system prevalent in Punjab.
At local and district levels the agitation continues like a red lamp continuously burning.
The author feels this struggle requires support of people world over .
He just returned from Bhatinda attending a rally on March 20th. The police clamped down on activists in the Mansa region and blocked the activists from going further in Lambi village of Muktsar district.

Below I am posting some news reports.
I wish the struggle was given greater coverage all over India and the world.
The important demands were
1. Demanding compensation for 200 familes in Gobindpura region
2. Giving compensation to families where peasants commited suicide amount of 5 lakhs instead of 2 lakhs given.4,800 familes have not received compensation,yet.
3. immediately release money for compensation
4. Oppose auctioning of land
5. oppose debiting system and law where merchants extract debit.
5. implementation of land reforms and awarding plots of 100 sq ft.to landless peasants.
The 2 significant results of this agitation were that the demands of paddy crops,land reforms and struggle against money-lender exploitation were launched and the bridge between the landless(basically scheduled caste and landed peasantry was reduced who have different demands.Instead of partial demands now basic demands were highlighted.
Quoting newspaper reports below:

BATHINDA: The Punjab government has agreed to pay Rs 64 crore to compensate the families of farmers and farm labourers, who committed suicide due to rising debt, in just three days as against the previous announcement of disbursing the money in two instalments over four months.
This follows the protesting peasant groups, who have laid siege to Bathinda district administrative complex for the past one week, threatening to disrupt the rally of BJP's prime ministerial candidate Narendra Modi, scheduled to be held on February 23.
The protesting farmers lifted the blockade on Tuesday evening following an assurance from the government.Rejecting the state government stand on payment of compensation to families of suicide victims, the protesting farmers had surrounded the Bathinda mini secretariat and completely blocked entry to offices of deputy commissioner (DC), senior superintendent of police (SSP) and deputy inspector general (DIG) of police.Following this, the government consented to hand over the compensation amount in three days and also pay Rs 6 crore to residents of Gobindpura village in Mansa, who were uprooted for setting up a thermal power plant. Bathinda DC K K Yadav and SSP Gurpreet Singh Bhullar gave a written assurance to agitating farmers that their demands have been accepted and urged them to end their protest.However, the farmers have decided to wait till February 21 for fulfilment of their demands, before dispersing from Bathinda. "We will wait till February 21 and remain at the children's park.
If government failed to implement the agreed proposal, we will revive our agitation," said Bharatiya Kisan Union (Ugrahan) general secretary Sukhdev Singh Kokri and Punjab Khet Mazdoor Union secretary Lachman Singh Sewewala.BATHINDA: After six days of intense protest, the Punjab government on Monday finally agreed to provide compensation to the tune of Rs 64 crore in two tranches to the farmers who have laid siege outside the mini-secretariat since Wednesday.The protesters, who have been demanding Rs 2 lakh compensation for the families of farmers who committed suicide, on Monday held lengthy parleys with Punjab chief minister Parkash Singh Badal's principal secretary S K Sandhu in Chandigarh where the government concede to their demand.Earlier, the government had identified 4800 families of suicide-hit farmers between 2000 and 2011 after surveys were carried out by Punjab Agricultural University, Punjabi University and Guru Nanak Dev University. At Rs 2 lakh compensation per family, the total amount sums up to Rs 96 crore."The state government has agreed to pay Rs 32 crore by February 28 and the rest Rs 32 crore by June 2014", Sandhu told TOI over phone adding that the has government already paid Rs 32 crore to the 4800 identified families earlier.The farmers' organizations, however, have not given their consent as yet to the government proposal. Bhartiya Kisan Union (Ugrahan) president Joginder Singh Ugrahan and Punjab Khet Mazdoor Union general secretary Lachhman Singh Sewewala, who attended the meeting said, "We want to discuss the offer at our state committees. We will respond only after discussing it thoroughly."
Quoting a report in the Tribune "A long wait of more than four decades seems to be ending for homeless farm labourers of Punjab with the state government, bowing to the persistent struggle and protests from farmer outfits, started giving possession of 5-marla (125 sq yards) plots to them in Kili Nihal Singh village of Bathinda district on Monday. The plots given to homeless were allotted in 1972, 1976 and 1997, but possession of these was not given to beneficiaries.
Bathinda deputy commissioner K K Yadav said, “Possession is being given to the homeless who were allotted plots in the past. The process has been started and it may take a few days more.” Bharatiya Kisan Union (Ekta Ugrahan) and Punjab Khet Mazdoor Union had been waging a struggle to get the plots handed over to homeless farm labourers for the past many years, and last month, the state government had conceded to their long-pending demand following intense agitation in Bathinda where hundreds of farmers and farm labourers had laid siege to district administrative complex. Both these organizations have a list of about 5,000 persons, who were allotted plots many years ago, but were awaiting possession.
Meanwhile, farm labourers have started protests at DC offices in Faridkot, Moga and Muktsar and at sub-divisional magistrate (SDM) office in Moonak town of Sangrur to get possession of plots that were allotted to them."
YOUTH MOVEMENT
Inspite of a great resurgence of peasant movement in Punjab the level of student and youth movement is considerably low. Punjab has a strong tradition of student movement and youth movement but the forces of globalisation and Imperialism have greatly diffused the political consciousness of the youth.

Today in Punjab there is severe unemployment..There is low industrial development to facilitate jobs for youth and very marginal employment facilities in rural areas.
The Naujwan Bharat Sabha(led by Pavel Kussa) demands employment for all,and alternative industries with a fixed amount of job opportunities.It blames the weakening of the public sector which has p[promoted private practice amongst doctors,private transport business and privatization of education.It demands the creating of new hospital;schools run by the public sector and abolishing of the contract system.
The NBS also calls for basic facilities in schools and demands adequate number of teachers who are employed on a regular basis.It demands more grants for colleges as well.It opposed the world bank water works scheme and demanded that the public sector should control the water supply organizations.
The NBS also demanded basic facilities for colleges like a library,toilets,water,electricity which are not always available.It also demanded adequate apparatus in civil hospitals,new doctors,new electricity line.Another agitation was against the exploitation of youth who wished to go abroad by private agents .NBS also fought for regularizing fee rises. It.It exposed the new economic policies.
In December 2013 in Moga an action commitee was formed opposing the kidnapping of a girl by a politician from a hospital.With the BKU(Ugrahan)it launched a joint agitation against the guilty politician.
A teachers agitation was also launched which led to the creation of a union.
On 24th February a state level programme was held by the Naujwan Bharat Sabha on the elections of 2014.It was propogated that the govt must redress the problems of unemployment.The cadres were educated on the nature of the education system manufactured to suit the ruling classes and rich sections and on how to organize youth in villages.For over a month a continuous series of area level meetings have been held in different areas of Punjab by the youth organization .It was highlighted that there are 45-50 lakh unemployed youth in Punjab. In one people's protest 10,000 people sat on a water tank which symbolized te wrath of the masses.
What is most important is the orientation of the student and youth movement which needs to inculcate general revolutionary democratic political consciousness amongst the students and youth.
Without that base and organzing on class issues education of Marxist -Leninist ideology will have no grounding.
Today the Naujwan Bharat Sabha led by the C.P.I.(M.L.) New Democracy is the strongest in Punjab.
Posted by nickglais on 3/23/2014 09:45:00 AM