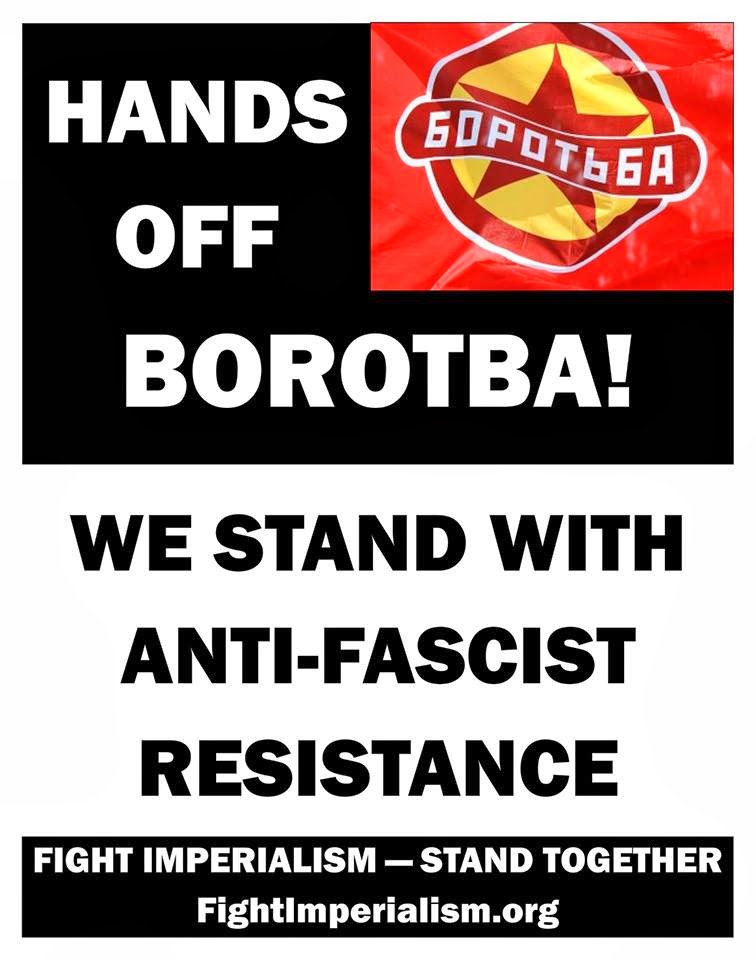 Emboldened by the U.S.-orchestrated coup d’état in the capital city of Kiev and Pentagon military posturing against Russia, fascist violence in Ukraine has escalated from vandalism to arson, beatings to shootings, and now — the brazen murder of anti-fascist activists. To answer these attacks, progressive and communist forces are continuing mass actions and organizing self-defense.

The murder happened near midnight on March 14 in Kharkov, one of many eastern cities in open rebellion against the Kiev junta. Members of the Right Sector fascist movement were officially deputized as part of a “National Guard” under new Interior Minister Arsen Avakov and dispatched from western Ukraine to infiltrate Kharkov.

But activists recognized the SUV the neo-Nazis were driving. Days earlier, the Right Sector had used it when shooting into the crowd at a large demonstration on International Women’s Day. The Kharkov defenders pursued the van.

They found it parked near the office of “Enlightenment,” a far right organization. As anti-fascists and community members gathered on Rymarskaya Street, armed neo-Nazis opened fire from inside, killing two activists on the spot. They also took three people hostage in an adjoining building.
The Right Sector immediately boasted of the murders on social networks, posting photos of their victims and bragging that none of their number were injured.

According to the leftist movement Union Borotba (Struggle), a key organizer of the Kharkov fightback: “Local authorities went to negotiate with the killers, who were confident of their impunity. They declared themselves part of the National Guard and brazenly demanded to be given a bus to leave and take their weapons to Poltava and Kiev. …

“However, the authorities did not dare, since Rymarskaya Street was already filled with hundreds of angry Kharkivites, who came from all over the city. Under their pressure, the Right Sector had to surrender and they were taken to jail. However, there is every reason to believe that those responsible for the shooting and killing will be released soon.”

By the time the fascists surrendered, a U.S.-style media spin was well underway. Newly appointed regional governor Igor Balut — a multimillionaire oligarch and protégé of the coup-makers — turned the massacre on its head, claiming that “the assault on Enlightenment is a well-planned provocation by pro-Russian activists.”

Activist Sergey Yudaev, who live-streamed the attack, told the RT news service that local authorities were trying to cover up the fact that the Right Sector had established a hideout with a weapons cache in the building.

Provocations, resistance in run-up to referendum

But if the Kiev junta and its Washington patrons thought the murders would intimidate the people of Kharkov, they were wrong.

On March 16, some 6,000 people marched in defiance of a government ban, according to the French news agency AFP. Demonstrators, many waving red flags, came out to support the right of people in Crimea to hold a referendum that day. They also held their own symbolic referendum demanding autonomy from Kiev.

People in Simferopol, Odessa, Donestsk, Lugansk, Melitopol, Yevpatoria, Kerch, Mariupol and other cities of Crimea and southeastern Ukraine have been in open rebellion against Kiev since the Feb. 22 putsch.

People’s defense groups like the one in Kharkov formed quickly. These ad hoc alliances have brought together anti-fascist activists, communists, former Red Army soldiers, ordinary workers and community members to defend their cities against the neo-Nazis.

But these courageous workers, youths and retirees are coming up against an organized, well-armed and well-funded plan to spread fascist violence throughout the country. Activists believe the unelected government in Kiev is carrying out a campaign of provocations to justify a military crackdown on the eastern regions, get additional weapons and funding from the Western imperialist powers, and, perhaps, enable a direct NATO confrontation with Russia.

Just one day before the murders in Kharkov, a fascist gang carried out a violent attack in Donetsk, a working-class, coal-mining city. Posing as a small group of counterprotestors, and with cover from police, they attacked a much bigger, peaceful anti-fascist demonstration with baseball bats, pneumatic pistols, Molotov cocktails and knives.

In the ensuing melee, 28 people were injured, one critically. A fascist was killed.

In Donetsk, too, people refused to be intimidated. Some 4,000 took to the streets on March 16, the AFP news service reported. Protesters seized the chief prosecutor’s office and besieged the offices of the Ukrainian Security Service (SBU), a political police agency similar to the FBI. They demanded the release of Pavel Gubarev, the “people’s governor,” arrested 10 days earlier on charges of promoting separatism.

Numerous attacks were reported as Crimeans prepared to go to the polls on March 16.
Crimean people’s defenders prevented an attempt to sabotage a gas pipeline at the Arabat Spit, Crimean Prime Minister Sergey Aksyonov reported. The saboteurs had claimed they were officers of the Border Guard.

In Simferopol, the Crimean capital, fascists posing as police officials were detained after they damaged and stole people’s passports and other identification to prevent them from voting in the referendum. A similar scam was uncovered in the city of Saky.

Nevertheless, at least 93 percent of Crimeans who went to the polls March 16 voted to separate from Kiev and join Russia.

On March 14, the website of the Communist Party of Ukraine was knocked out by what was described as “a major hacker attack.”

Immediately after the February coup, the home of CPU leader Peter Symonenko’s son was ransacked and burned down. Rightists trashed the CPU headquarters and other anti-fascist sites in Kiev. The communists are still being prevented from reoccupying their offices in the capital.

In an interview published in the German left daily Junge Welt on March 10, Borotba leader Sergei Kiritschuk described how members of his organization were forced to go underground or flee to eastern regions to avoid capture.

Anti-fascist demonstrations are currently impossible in the capital, he said. “Every demonstration with a red flag would be immediately attacked by fascist gangs.”

Kiritischuk described how a CPU member visiting Kiev in early March was detained by the Right Sector, kidnapped and beaten. Only through the intervention of a volunteer medic was the man freed and put on a train to Moscow. He was hospitalized there with lung injuries and broken ribs

But the persecution also takes official channels, as neo-Nazis associated with Svoboda, the Right Sector, the Maidan Self-Defense and other groups have assumed the most powerful roles in the new government with control over the military and police agencies.

For example, in Odessa, Borotba leader and regional council deputy Alexie Albu was pursued and questioned by the SBU.

On March 3, Albu had introduced a proposal in the Odessa council calling for a referendum on the creation of an autonomous republic. Although the proposal was defeated 14-39, it proved very popular with local residents, who occupied the council chambers and took up the demand for a referendum.

Albu presented himself at the SBU with a crowd of supporters. Afterward he said: “I’m not afraid of the security services. … I did not testify in the investigation. I signed nothing.”

As Washington’s war propaganda reaches fever pitch in the aftermath of Crimea’s referendum, workers, youth and anti-war activists in the U.S. must stand in solidarity with the anti-fascist resistance in Ukraine.
Posted by nickglais on 3/18/2014 02:05:00 PM