Nepal : Pampha Bhusal of CPN- Maoist on prospects of unification, their opposition to local elections and the party’s roadmap 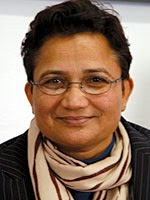 Pranaya SJB Rana and Roshan Sedhai of E Kantipur spoke to CPN- Maoist party spokesperson Pampha Bhusal  about the prospects of unification, their opposition to local elections and the party’s roadmap

What are the prospects for reunification with the UCPN (Maoist)?

It should be understood that, for now, we have only formed a working alliance with the UCPN (Maoist). We split from the party due to differences in ideology and policy.

However, we still believe that all revolutionary communist parties should come together. So we have initiated unification processes with the Pari Thapa-led CPN (Unified) and the Mani Thapa-led Revolutionary Communist Party of Nepal.

We will form an alliance with any party that is leftist, republican and revolutionary. Right now, we are focused on halting ongoing activities that go against the Comprehensive Peace Agreement and the restructuring of the state, like the push for local elections.

We took the initiative to approach the UCPN (Maoist) regarding this issue and we happened to agree, so we issued a joint statement as part of a working alliance. This is where we have reached so far.

But in an interview with the Post last week, UCPN (Maoist) Chairman Pushpa Kamal Dahal seemed to hint that you were pretty close to an alliance.

Of course, the working alliance could always be a step towards party unification but right now, we are not close to unity. The CPN-Maoist still believes in the need for a new people’s revolt as the CA has been captured by those who were once against federalism, secularism and republicanism.

The UCPN (Maoist), on the other hand, went to Hetauda, decided that the revolution was complete and adopted a different line of socialist movement.

We will have an alliance only if the UCPN (Maoist) rectifies this line.

The main issue before the country is still of national sovereignty. In fact, foreign interference has increased in our country, especially after the declaration of a republic.

We have become part of India’s neocolonial project.

We want to annul the unequal 1950 India-Nepal treaty and we want all interferences in our administration, politics and government to stop, along with the encroachment of our water resources and our borders.

This is what we mean by national sovereignty.

And in your interview with Comrade Prachanda, he claims that he made a mistake by not giving due importance to issues related to national sovereignty in the period before the national election.

We regard this as a positive development.

Before the November election, you had demanded the holding of an all-party roundtable. Chairman Dahal has now said that he is open to this idea. Are you still willing to take part in a roundtable?

We had demanded a roundtable before, but now, we are demanding a high-level national council. The fact is that the CA has fallen into the hands of the status quoist forces.

A progressive federal republican constitution, as desired by the people, will not be written through the CA.

So our proposal is for both the Maoists inside the CA and the Maoists outside the CA to come together and form a council that will produce a progressive constitution.

This council will be political in nature but it will not just include politicians.

There will also be professional and civil society representatives, like from the Federation of Nepali Journalists and the Nepal Bar Association. All viewpoints will be accommodated.

Will this not make the entire CA redundant? You called on the people to boycott the November election but millions of people defied your calls and came out to vote. Doesn’t the new mandate mean anything to you?

The CA does not hold any value to us. A constitution produced through the CA may not receive broad ownership and could even be a pretext for more violence in the future.

Those elections never changed anything. Change is more important than votes. What should matter is who is holding the election and for what reasons.

During the November election, thousands of Army personnel were mobilised. Our boycott was peaceful and political in nature, but the state decided to treat it like a war.

We had warned that a CA elected through such means would not produce a people’s constitution and look at the CA now, the process of destroying the agendas of change has already begun.

Just listen to all this talk of local elections.

Isn’t it about time that we hold local elections? The country has been running without local representatives for more than 15 years now.

Yes, it has. So why weren’t elections held during those 15 years? Why is it so important all of a sudden to hold local elections right now?

Local elections could have been held alongside the CA election in 2008, so why weren’t they?

What we are proposing is that a new high-level political agreement be made among all parties and a national council be created.

This council will produce a federal, republican constitution and then, on the basis of that constitution, we can hold local elections.

We will have new provinces and those provinces will decide on the delineating areas for constituencies.

Our agenda is a new people’s revolt.

This includes ending foreign interference in our country and reestablishing national sovereignty by scrapping the 1950 India-Nepal Treaty of Friendship and all other unequal agreements that have allowed foreign powers to take undue advantage of our resources.

This also means securing our borders and ending encroachment.

Second, we want to produce a people’s constitution that is inclusive, proportional, federal and republican.

If the CA attempts to produce a regressive constitution that will take us back to 1990, then we have plans for a protracted people’s movement.

Third and most important is to end initiatives that are making the people’s daily lives more difficult, like inflation, unemployment and corruption.

Since the new government was formed, in less than a month, the price of water, milk and petroleum products has gone up.

Now, there are plans to even increase the price of electricity.

We want to end all of this.

You keep mentioning a ‘new people’s revolt’. What exactly does that mean?

This will be a people’s movement that is based on the foundation of the ‘people’s war’. We know that if needed, the people can take up weapons, form an army and a revolutionary party.

We believe that the Nepali people themselves are still capable of bringing change to the country. Now the actions of those opposed to change and those agents acting on behalf of foreign powers will determine the mode of the revolt.

However, our experience has shown us that, in simple terms, the state will not change through peaceful means.

But violent means have failed in the past. Given that you joined the mainstream political process by giving up arms, how can you still advocate the use of violence to achieve political ends?

Violent revolutions played a major role in toppling the Panchayat and the monarchy.

I believe we still need non-peaceful means of resistance.

When the state compels the people, they will rise to the occasion.

Do you think the Nepali people have an appetite for another prolonged violent revolution? Even the Maoist forces are not the same as they were during the war years.

Our strength lies with the people.

When necessary, the people will take up arms.

If it comes to an open revolt,

I believe that even those currently in the mainstream will join us.

When Janaandolan II was at its peak, even officials from the Home Ministry came down to the streets to protest.

When the authorities ordered the police to open fire on protestors, they refused to do so.

It hasn’t even been 10 years since we experienced this. I believe that the party and the people still have strength to revolt.