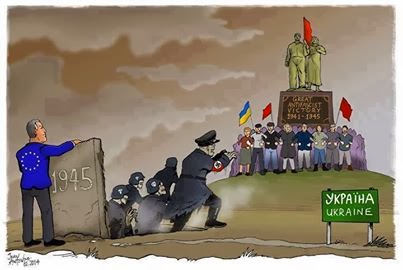 We unreservedly condemn the recent putsch in the Ukraine in which a leading role was played by Nazis and Fascists of Fatherland, Svoboda and Right Sector and other Banderites.

We condemn all the feuding capitalist oligarchic clans in the Ukraine both pro European and pro Asiatic Union.

We call for solidarity with all anti Nazis and anti Fascist forces in the Ukraine at this dangerous time.
Whilst we recognise that any Russian military intervention would be primarily aimed at securing the privileges of the Russian bourgeoisie, nevertheless it would be in opposition to the main enemy, Western Imperialist finance capital and their Nazi-front government.

The working class should fight side by side with the Russian troops and their supporters in the East against the Nazi led government in order to defeat them and then to prepare the overthrow of their temporary allies on the morrow just as Lenin did in September 1917 when he tactically allied with Kerensky against the Kornilov coup.

We call for and support the creation of anti fascist workers militias throughout the Ukraine and condemn use of NATO covert forces in Ukraine under the cover of the UNA USO paramilitary and the overt and covert activities of the US National Endowment for Democracy.

The Ukrainian people have met the Nazis and Fascist challenge in the past and wrote a brilliant chapter in the Anti Fascist struggle against the Banderites and Hiltlerites in the Second World War, they must live up to the heroism of their past in the struggle of today.

Socialist Fight and Democracy and Class Struggle come from completely different socialist political traditions but have joined together to bring attention to the Fascist and Nazis danger in the Ukraine and to call for support for Ukrainian Anti Fascists like Borotba.