Ukraine: Dnepropetrovsk: Police and the neo-Nazis against the people 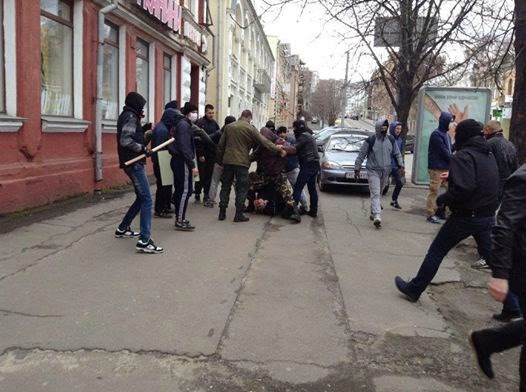 On March 16 neo-Nazis of the “Right Sector” attacked an anti-government rally in Dnepropetrovsk, which was banned by a decision of the local authorities. It is noteworthy that the ultras are working hand in hand with police officers, who are now patrolling the streets of the city together with the fascists.

Before the rally, police officers stopped the car carrying four activists and detained them, sending them to the police department ”to clarify their circumstances.” On hearing this, protesters marched to the police station, demanding the release of detainees. On the way to the office at about a hundred activists were attacked by militants of the “Right sector , armed with sticks, machetes and traumatic guns. As a result, two members of the anti-government protests were sent to the hospital with stab wounds and injuries received as a result of the beatings. One of them was diagnosed with fractured ribs and a traumatic brain injury.


On the same day other participants in the rally were attacked. In particular, one young man, who was going to the rally with a woman, was beaten up by fascists carrying sticks.
Thus, it must be said - the new authorities of Dnepropetrovsk, headed by the oligarch Igor Kolomoisky, rigidly suppress protests of local residents through the efforts of police, ultras and mercenaries of private security force “Privat.”

Restrictions on democratic freedoms that are practiced by the new regime are unprecedented for Dnipropetrovsk.

The authorities, the police and fascism, in fact, are fused together.