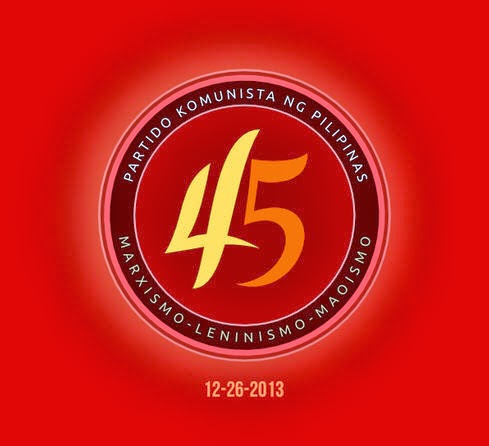 As leaders of the CPP, Tiamzon and Austria are the opposite of the landlord Aquino and his coterie of corrupt officials... Unlike Aquino who was totally clueless about supertyphoon Yolanda, Tiamzon and Austria immediately mobilized the CPP’s forces to carry out relief work and help in the rehabilitation of the people's lives.

At the time of their arrest, both Tiamzon and Austria were performing tasks and duties assigned to them by the CPP and the NDFP. Up to recently, both were busy conducting first hand investigation into the conditions of the working class people in the Visayas region whose lives were devastated by supertyphoon Yolanda (Haiyan) and who continue to suffer from the Aquino regime’s antipeople, crony-controlled, corrupt, and grossly inept response to the calamity.

Both were closely monitoring the efforts of the New People’s Army (NPA) in carrying out rehabilitation work in devastated regions. They were receiving reports from NPA commands about efforts to mobilize Red fighters to help build communal farms, till the land and mobilize and distribute seeds and other agricultural resources from the NDFP.

Austria, who has been among the country’s stalwarts in upholding and bannering the rights of women, is gravely concerned with the situation of women and children after the calamity, and has been vigorously calling on all revolutionary forces to work hard to expose their sufferings and extend all possible effort to alleviate their conditions. She was utterly indignant at having learned that substantial amounts of relief goods had rotted at the Aquino government’s warehouses while the people of Tacloban continue to suffer from lack of food, shelter and income.

Tiamzon, himself, has been actively looking into the widespread devastation wrought by the storm on the agricultural economy and fishing communities of Eastern Visayas, Cebu, Panay and Negros. He was personally looking into studies estimating the actual damage on agriculture and fisheries to be at P75-80 billion, contrary to the Aquino regime’s grossly understated estimate of P15 billion which help justify the allocation of bigger funds to his crony’s big business infrastructure projects.
As peace consultants of the NDFP, the arrest of Tiamzon and Austria further imperil peace negotiations between the GPH and the NDFP. The CPP condemns the Aquino regime for outrightly violating the Joint Agreement on Safety and Immunity Guarantees (JASIG) in carrying out the arrest and detention of Tiamzon and Austria. They are both publicly known figures in peace negotiations. The NDFP has further identified both Tiamzon and Austria as holders of documents of identification counter-verified by then officials of the GPH.

Such effort by the Aquino regime seeks to draw away attention from the public flak it is getting for its lies, corruption and ineptness, especially at the heels of its monumental failures in addressing the urgent demands of the people of the Visayas devastated by the supertyphoon. The Aquino regime is increasingly isolated from the people because of its contempt and disregard for the socio-economic conditions of millions of workers and peasants who suffer from its wrong economic policies that prioritize the interests of its cronies and its foreign big business bosses.


As leaders of the CPP, Tiamzon and Austria are the opposite of the landlord Aquino and his coterie of corrupt officials. Tiamzon and Austria are the epitome of simple living. Neither of them own a private home nor drive their own sportscar. Neither do they play with guns for fun or personal satisfaction. They are not like Aquino and his officials who plunder public funds to aggrandize themselves or perpetuate their political rule.


Despite their age and health conditions, both Tiamzon and Austria continue to travel great distances in the rural areas in order to reach the farthest peasant homes and be among the most downtrodden masses. Unlike Aquino who was totally clueless of the conditions of the people in the path of supertyphoon Yolanda, Tiamzon and Austria were among the peasant masses when the winds ravaged through the Visayas. Unlike Aquino who took four days to act, Tiamzon and Austria immediately mobilized the CPP’s forces to carry out relief work and help in the rehabilitation of the peasant masses who suffered grave devastation of their crops and livelihood.


The CPP demands the immediate release of Tiamzon and Austria, as well as all their companions, and the dropping of all criminal charges against them. The CPP demands that the Aquino regime accord them the right to counsel and medical attention. Austria has severe asthma, and suffers both from a serious kidney ailment and spinal bone degeneration secondary to osteoporosis, and is in need of constant medical care.


The CPP, together with the workers, peasants and downtrodden masses and all their revolutionary forces, deplore the arrest of Tiamzon and Austria. Their arrest forms part of the general trend of repression under the Aquino regime. Daily, the landlord Aquino seeks to perpetuate the oppressive and exploitative system by unleashing his attack dogs, armed and supported with US military financing, against the peasant masses and workers, who stand up for their rights and voice their demands.


It is the Aquino regime’s puppetry, corruption, brutality and mendacity that teach the Filipino people about the need to wage revolutionary resistance. They are thus ever determined to advance along the path of widespread mass struggles and revolutionary armed resistance in order to achieve national and social liberation.
Posted by nickglais on 3/23/2014 09:23:00 AM