British Foreign Secretary William Hague says Russian speakers in Ukraine have nothing to fear: Has he not heard of Andriy Volodymyrovych Parubiy who from Street Nazis has risen to be Secretary of National Security and Defence Council of the Ukraine 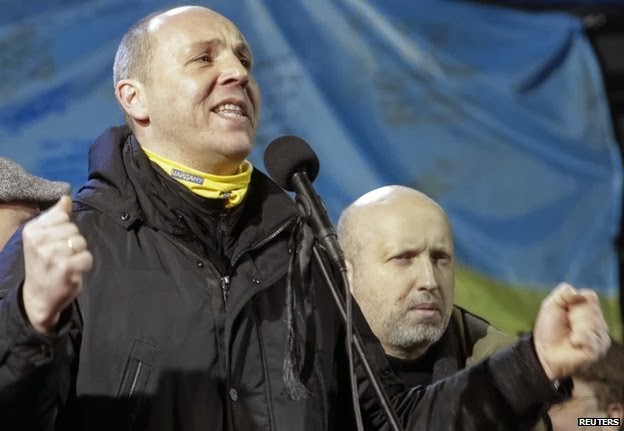 Andriy Volodymyrovych Parubiy (Ukrainian: Андрій Володимирович Парубій) is a Ukrainian politician[2] and the Secretary of the National Security and Defence Council of Ukraine, appointed after playing leading role the recent putsch in the Ukraine.

In 1991 he founded the neo-Nazi[5] Social-National Party of Ukraine together with Oleh Tyahnybok.[2] Parubiy co-led the Orange Revolution in 2004.[2][6]

In the 2007 parliamentary elections he was elected into the Ukrainian parliament on an Our Ukraine–People's Self-Defense Bloc ticket.[2]

In February 2010 Parubiy had asked the European Parliament to reconsider its negative reaction to former Ukrainian President Victor Yushchenko's decision to award Stepan Bandera, the leader of the Organization of Ukrainian Nationalists, the title of Hero of Ukraine.[8]

Early February 2012 Parubiy left Our Ukraine because their "views diverged".[9] In 2012 he was re-elected into parliament on the party list of "Fatherland".[10]

In 2013–14 Parubiy was a commandant of the Euromaidan.[11] He was coordinator of the volunteer security corps for the mainstream protesters.[12]

Democracy and Class Struggle says of course William Hague knows about the Nazis and Fascists in the Putsch Government of the Ukraine and is happy to cover for them has the BBC has been editing out Nazis Insignia on Ukrainian Nationalists and downplaying their key role in the Ukrainian Putsch.


Has we have published NATO has long history using Nazis in Ukraine under Gladio and now under Gladio B.The Ukrainians and Russians are supposed to sleep well protected and guarded by a Street Nazis according to William Hague who spoke this dangerous nonsense to the British Parliament today.

There is a meeting of the NATO UKRAINE COMMISSION underway on the current Crisis and Ukrainian Nazis like Parubiy can be assured of a warm welcome.