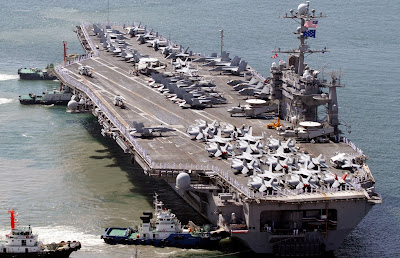 
The Communist Party of the Philippines (CPP) denounces the US government for using the grave human tragedy wrought by the recent supertyphoon Yolanda (international name Haiyan) in order to justify its operations to further increase the presence of its military warships and armed troops in the Philippines.

“The US government is engaged in disaster interventionism, exploiting the supine state of the Philippines after it was struck by supertyphoon Yolanda, in order to justify its deployment of armed, nuclear-powered and interventionist military warships and armed troops in the Philippines,” said the CPP.

“The CPP and the Filipino people denounce the Aquino government for shamelessly welcoming the US military troops with open arms.”


Citing news reports, the CPP pointed out that the US has deployed to the Philippines no less than six warships including US flagship aircraft carrier USS George Washington, that has with it at least 80 jet fighters as well as war helicopters and 5,000 naval soldiers. It will be accompanied to the Philippines by the USS Antietam, USS Cowpens, USS Mustin, USS Lasses guided missile cruisers, and the USS Charles Drew supply ship. Meanwhile, the British government is also sending the HMS Daring warship and a Boeing C-17 military transport aircraft.


The CPP further pointed out that aside from the warships that are sailing from Hong Kong and elsewhere, US armed personnel and equipment were already prepositioned in Manila and other parts of the country, indicating the continuing presence of armed US troops in the national capital. There are also news reports indicating that the facilities of the Tacloban airport have been taken over by the US military. The US military has also taken advantage of the disaster in order to gain access to the Mactan airport and seaport which has long been a subject of negotiations for increased US rotational presence in the Philippines.


Over the past three years since declaring its “Asia pivot”, the US government has been increasing its “rotational presence” in various countries in the Asia-Pacific region resulting in the militarization of territorial disputes and diplomatic relations among countries in the region and in outright violation of the territorial sovereignty of the Philippines and other countries.


“The Filipino people seek and welcome international support in the face of the terrible devastation brought about by Yolanda in a wide corridor across the Philippine islands,” said the CPP. “However, though devastated, the Filipino people has preserved their sense of national dignity and will continue to defend their sovereignty against foreign military interventionism.”


“What the disaster victims need urgently are food, water and medical attention, not US warships bringing in emergency rations to justifty their armed presence in Philippine sovereign waters,” pointed out the CPP. “If the US government were really interested in providing assistance to countries who have suffered from calamities, then it should increase its funds to civilian agencies that deal in disaster response and emergency relief, not in fattening its international military forces and taking advantage of the people’s miseries to justify their presence,” added the CPP.