Sri Lanka : Cameron and Hague exposed has Sri Lanka cracks down has the Commonwelath Summit starts in Colombo 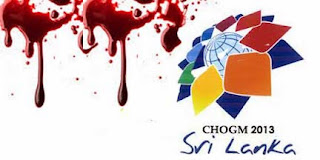 More than 100 Tamils whose family members disappeared during and after Sri Lanka's civil war have been prevented from entering Colombo.

UK's Channel 4 News Team has been prevented from visiting former war zone in the North.

Mr Callum Macrae Director of Channel 4's award winning documentary No Fire Zone Sri Lanka's killing fields was told he had to stay in Colombo by the Sri Lankan police.

Earlier  Australian Greens senator Lee Rhiannon had been unlawfully detained by Sri Lanka authorities and has now returned to Australia.

William Hague and David Cameron stand exposed has the hypocrites that they are on the question of human rights in Sri Lanka even has the Commonwelath Conference opens.

If Sri Lanka become chairman of the Commonweath for the next two years then Hague and Cameron will compound their criminal duplicity on human rights and complicity with the Sri Lankan Regime.

"The consequences of hosting CHOGM in the island of Sri Lanka and appointing as its leader who is accused of war crimes, crimes against humanity and genocide as Chair of the Commonwealth Ministerial Action Group (CMAG) are innumerable and will devastate not only the Tamil People, but also the international community as a whole.

The attention afforded to Sri Lanka as host of CHOGM has only bolstered its ability to obscure the real issues, and in turn allowed the government to escape accountability and justice."