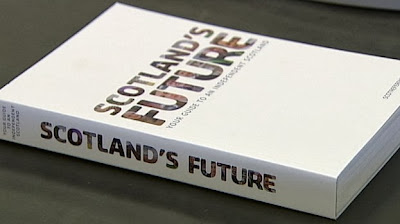 1 The Scottish Socialist Party welcomes the publication of the Scottish Governments Independence White Paper ‘Scotland’s Future – Your Guide to an Independent Scotland’. We believe it is a comprehensive and timely addition to the most important debate the people of Scotland have faced in decades.
2 As partners in the ‘Yes Scotland’ coalition the Scottish Socialist Party shares the Government’s commitment to Independence and belief in the immense benefits it can bring the people of Scotland.
3 We commend the White Paper’s commitment to social and political democracy, prosperity and fairness. We believe it reflects the social democratic aspirations of the people of Scotland and we particularly welcome those sections; providing universal free childcare for pre-school children, scrapping the hated ‘bedroom tax’, removing Trident nuclear weapons, growing Scotland’s economy and population by welcoming those who wish to come and live here, returning Royal Mail to public ownership, introducing a written constitution, providing seats for worker directors on company boards, supporting greater environmental protection, promoting greater energy efficiency and extending much needed social protection to vulnerable and disadvantaged groups.

The White Paper sets out a clear vision of Independence that unquestionably represents very significant advance for the people of Scotland.  We also welcome the commitment to reduce gas and electricity bills by 10% per annum after Independence but would like to have seen the Scottish Government go further given the publics very real concern over these bills and re-iterate the pledge it made in its 2007 manifesto to eradicate fuel poverty in Scotland completely.
We would also liked to have seen a commitment to take the renewable energy industry into public ownership – just as the Scottish Government did recently with Prestwick Airport - and to return our gas and electricity supply industry into public hands as we believe both measures are concomitant with pledges to achieve greater economic prosperity, social democracy and fairness. The SSP also prefers the approach Norway took to its oil and gas resources in taking them into public ownership rather than privatising them.

4 The Scottish Socialist Party advocates an Independent socialist Scotland. And like many Scots we favour a modern democratic republic. There are inevitably therefore some proposals in the White Paper we do not support such as reducing Corporation Tax, entering a ‘Sterling Zone’ for our own currency, NATO membership and retaining an un-elected, unrepresentative monarch as our Head of State in our new, modern, democratic Scotland.
Nonetheless, we wholeheartedly agree with the view expressed in the White Paper that ‘Decisions about Scotland will be taken by the people who care most about Scotland – those who live and work here’. And in that spirit we fully acknowledge that all the issues in the White Paper should and indeed will be decided by the people of Scotland themselves in the first elections to our newly Independent Parliament in 2016.

5 For our part the Scottish Socialist Party will continue to highlight the significant advantages Independence brings to Scotland; no more Tory Governments, no more Trident missiles, no more ‘bedroom tax’, returning the Royal Mail to public ownership, a fairer tax system, and above all self-determination for the people of Scotland at last – all in all a much more attractive prospect than the one we currently face.

6 The Scottish Socialist Party remains focused above all on winning a resounding ‘Yes’ vote in the 2014 Referendum and we continue to work alongside all our partners in the ‘Yes Scotland’ coalition to secure that pre-eminent objective.

Colin Fox, on behalf of the Scottish Socialist Party
From Newsnet Scotland
Scottish Socialist Republic Comment
I also welcome the positive response from Colin and the SSP the White Paper is detailed and much to read but the SNP through FM Alex and Deputy Nicola have provided us with the bones by public announcement. Above all it is child friendly and family included while rejecting the madness of Trident nuclear weapons
A Republican Socialists we are not in agreement with all that is in offer. The EU, Sterling or keeping the Pound, NATO, and god dammit the Monarchy.
However the document from the Scottish Government is well thought out and despite the Unionist media propaganda it ready to be put to the test after a Yes vote for independence.
What we should do as Republican Socialists is welcome the SSP response and expect more from a somewhat fragmented Scottish Left.
Mind you the emergence of the Radical Independence Campaign from the SWP breakaway International Socialist Group (ISG) and other assorted groups on the left in Scotland there is hope and anything is possible here, that we concentrate on Scottish Freedom, and only then can we argue, campaign, fight whatever you like for an independent Scottish Socialist Republic as outlined by John MacLean after we get an Independent Scotland, albeit initially social democratic and a tad reformist. Anything better than the British imperialist status quo.
Anyway what I recognise is that things are different here and we have a real opportunity in 2014 to vote for independence and circumstances are very different here to the issues of England or Wales or even Cornwall. I cringe at reading the comments on the Socialist Unity website on the Scottish question.
Let us walk before we can run first we must get independence then build on it and hell socialists like us will be there for the Republic.
Larry
Scottish Socialist Republic
http://www.scotsrepublic.com
Posted by nickglais on 11/28/2013 02:47:00 PM