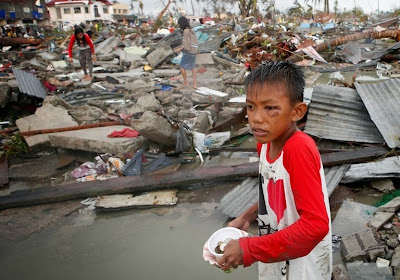 Among the areas devastated by the strong winds are revolutionary base areas which are within the scope of the provisional revolutionary government, and in the areas of operation of the New People’s Army and other revolutionary mass organizations.

The Communist Party of the Philippines (CPP) today extended its sympathies to the millions of people affected by supertyphoon Yolanda which ravaged provinces in Eastern and Central Visayas, in Panay, Negros, Masbate, Mindoro, Palawan, and other islands, as well as in areas in Eastern and South Eastern Mindanao, Northern Mindanao and provinces in Southern Luzon.


At the same time, the CPP called for mass mobilization across the country and abroad, to generate emergency supply and funds for rescue, relief and rehabilitation efforts. The CPP called on “people in the areas least affected by the storm to extend maximum possible help to the people who are most in need of emergency assistance.”


Yesterday, tropical storm Yolanda (international name Haiyan) barreled across the Philippines, leaving a wide swath of destruction. Yolanda is considered to be among the strongest typhoons ever to hit land, and one of the most powerful of storms over the past 30 years.

The CPP also pointed out that many of the areas ravaged by the typhoon were those recently hit by powerful earthquakes where people were most vulnerable to the strong winds and rains.

“These areas are among the most impoverished in the entire country, where the majority are poor peasants, unemployed farm workers, small fisherfolk and indigenous peoples,” said the CPP. “They have long been abandoned by the reactionary government and will not be among its priorities for assistance.”


The CPP said it is still awaiting detailed reports from its local committees, as well as mass organizations and NPA units in the areas.

[Donations can be sent to the international office of the National Democratic Front of the Philippines:


The head of the Red Cross in the Philippines has described the devastation caused by Typhoon Haiyan as "absolute bedlam".

Officials estimate up to 10,000 people have died in Tacloban city and elsewhere. Hundreds of thousands of people are displaced.

Rescue efforts are being hindered by damage to roads and airports.
MESSAGE FROM JOMA SISON:

The Aquino regime is covering up its failure to provide timely rescue and relief by playing up looting.
These stupid bureaucrats could have just opened up relief warehouses and even buy the food and water stocks of the private stores and supermarkets with calamity funds.
But they are more interested in stealing calamity funds.
The Aquino regime is also limiting by propaganda the scale of devastation by Yolanda. Samar, Leyte, Cebu, Bohol, Negros provinces, Panay provinces and so on are also devastated.
The calamity funds have been stolen from year to year.
There may not be enough to cover rescue, relief and rehabilitation of the  devastated people and areas.