November 17th is the birth date of Robert Owen the 19th Century Welsh Social Thinker, so it is appropriate to look at his legacy.

Robert Owen was born in Newton a small market town in Montgomeryshire, Wales in 1771.

He was the sixth of seven children. His father, also named Robert Owen, had a small business as a saddler and ironmonger.

Owen's mother was a Miss Williams, and came from one of the prosperous farming families.

Here young Owen received almost all his school education, which ended at the age of ten.

In 1787, after serving in a drapers shop for some years, he settled in London.

He travelled to Manchester, and obtained employment at Satterfield's Drapery in St. Ann's Square.

By the time he was 21 he was a mill manager in Manchester at the Chorlton Twist Mills.

His entrepreneurial spirit, management skill and progressive moral views were emerging by the early 1790s. 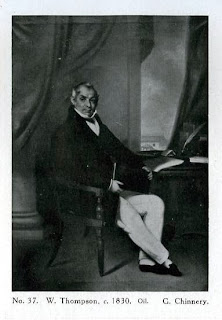 
William Thompson was born in 1775 in  Cork, William was the son and heir of one of the most prosperous merchants of that city, Alderman John Thompson, who held, amongst other offices, that of Mayor in 1794.

William inherited the small trading fleet and landed estate near Glandore, West Cork after his father's death in 1814.

Rejecting the role of absentee landlord  commonly led by those of a similar situation, William based his living quarters on the estate and despite many travels, invested much time with the tenants on the estate introducing agricultural innovations, services and education for children aimed at improving the welfare and prosperity of the families present.


His first departure in social reformism took place in 1817, and was embodied in a report communicated to the committee of the British House of Commons on the Poor Law
The general misery and stagnation of trade consequent on the termination of the NapoleonicWars was engrossing the attention of the country.

After tracing the special causes connected with the wars which had led to such a deplorable state of things, Owen pointed out that the permanent cause of distress was to be found in the competition of human labor with machinery, and that the only effective remedy was the united action of men and the subordination of machinery.
His proposals for the treatment of poverty were based on these principles. Communities of about twelve hundred persons each should be settled on quantities of land from 1,000 to 1,500 acres (4 to 6 km2), all living in one large building in the form of a square, with public kitchen and mess-rooms.
Its fully developed form (as it did not change much during Owen's lifetime) was as follows. He considered an association of from 500 to 3000 as the fit number for a good working community. While mainly agricultural, it should possess all the best machinery, should offer every variety of employment, and should, as far as possible, be self-contained. "As these townships" (as he also called them) "should increase in number, unions of them federatively united shall be formed in circles of tens, hundreds and thousands", till they should embrace the whole world in a common interest.
In Revolution in the Mind and Practice of the Human Race, Owen asserts and reasserts that character is formed by a combination of Nature or God and the circumstances of the individual's experience.

Thompson and others of the Co-operative Movement have tended to be somewhat neglected or unfairly subsumed under the political label of Owenism.
In fact, although his writings and social experiments at New Lanark had helped to bring the cooperative movement together, many, Thompson included, were critical of Owen's authoritarian and anti-democratic tendencies in fact watchtowers were always a feature of Robert Owen's ideal settlements.
Thompson further distrusted Owen's courtship of rich and powerful patrons, believing that the rich as a class could be never be expected to be in favour of any project of emancipation for the labouring poor as this would threaten their privilege.
He also believed in the necessity of the workers in any co-operative community having eventual security of ownership of the community's land and capital property.
He gained a considerable following within the cooperative movement for these positions and it was to distinguish themselves from Owen's positions that this wing of the movement began to adopt the label of "socialist or communionist" (Letter to "The Cooperative Magazine", London, November 1827, cited has first documented use of socialist) rather than "Owenist".
These differences led to open confrontation between Thompson and Owen at the Third Cooperative Congress held in 1832 in London.
Owen, perhaps discouraged by the failure of his attempted community at New Harmony, maintained that it was necessary to wait for Government and Stock Exchange support and investment into large scale communities

Thompson and his supporters contended that they must move towards establishing independent small scale communities based on the movement's own resources.
The argument was not resolved at that congress and by the following one Thompson was unable to attend probably as a result of the illness that was to lead to his death in another five months aged 57 years.

William Thompson has a very famous debate with Thomas Hodgkin's over the role of the competition and the market that resonates even to this day in the socialist and communist movements.

In Labour Defended in 1825 Hodgkin asked how the products of labour should be distributed after the priviliged capitalist class was overthrown. And he answered :

"If all kinds of labour were perfectly free, if no unfound predjudice invested some parts, perhaps the least useful, of the social task with great honour while other parts are improperly branded with disgrace, there would be no difficulty on this point and the wages of individual labour would be justly settled by what Dr Smith calls the "higgling" of the market (1922 Edition page 86)

William Thompson the County Cork Socialist replied to this arguement in his book Labour Rewarded (1827).

The substance of Hodgkins view was that, freed from the priviliged class of capitalists , the market would serve socialism. Thompson replied :

"But a might obstacle here presents itself. Is not the competitive system itself an insourmountable bar to this perfect freedom of labour and to this equal diffusion of knowledge" (page 5)

"A sorry exchange the productive classes would make - an exchange of masters only - pampering a new host of swaggerers, with their varied coloured merits in their bonnets, instead of in the herd of capitalists. The game of the ins and outs has been to often played by unprincipled politicians on the productive classes. They will not be fooled with the same game between wit and genius, and capital: capital , the outs , wit and genius in, the ins.

" It is not the differences of production of different labourers, but the complicated system of exchange of those productions when made, that gives rise to that frightful inequality of wealth with all of its train of physical and social evils. How strange then that the "labourer"...should be sent off to the mere "higgling" of the market, the regulation of exchanges " (page 12)

... the springs of this higgling will always be kept of the adepts, and they will be so regulated, that prizes there will still be, and those prizes will fall into the hands of the most skillful in the higgling exchanges of competition and therefore in nine cases out of ten, into the hands of the least benevolent. Page 36

"The pleasures of competition founded on the inferiority of comforts , of intelligence, or of moral qualities of others, are fenced round with envies, jealousies, ill will, suspicions and dread of ill offices from all around: and could never be approved as useful motives to human exertion.. (page 63)

"Labourers must acquire knowledge to regulate their labour on a large united scale, before they will be able to do anything than dream of enjoying the whole of their products of their labour. Added to knowledge, the industrious classes must also acquire power, the whole power of the social machine in their own hands, in order to render their knowledge available on a national scale, and with immediate effect, for promoting the impartial and equal happiness of all" (page 73)

"If we were to attempt to estimate the relative achievements of Thompson and Marx we should not hope to do justice to either by putting them in contrast, or by eulogising Thompson in order to belittle Marx, as some Continental critics of the latter seek to do.

Rather we should say that the relative position of this Irish genius and of Marx are best comparable to the historical relations of the pre-Darwinian evolutionists to Darwin; as Darwin systematised all the theories of his predecessors and gave a lifetime to the accumulation of the facts required to establish his and their position, so Marx found the true line of economic thought already indicated, and brought his genius and encyclopaedic knowledge and research to place it upon an unshakable foundation"


The ideas of Robert Owen of social reformism and regulated capitalism were to find later embodiment in the growth of the Co-operative Movement and the  British Labour Party.


Those who favoured social reform like Robert Owen and those like William Thompson who were called socialists or communionists the vernacular of the time.

James Connolly in Labour in Irish History pays tribute to William Thompson has the forerunner of revolutionary Socialism and while we appreciate the good heart and good intent of Robert Owen, Owenism ideologically lead to a reformist political party like the Labour Party.

The Ideas of William Thompson went on to inspire James Connolly to form the Irish Socialist Republican Party in 1896 and the ideas underpinning revolutionary socialism all over the world has Thompson's ideas were incorporated in Marxism and inspire us today.

Aflyonddwch Mawr is in the tradition of our Celtic brother from County Cork - William Thompson, while we respect the honest heart and good intent of Robert Owen and his contribution to the co-operative ideal and his interest in land..


Owenism is not the road to national and social liberation has almost two hundred years of reformism has shown - something that was interestingly  anticipated by William Morris at the end of the 19th century here in 1888.