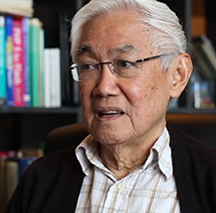 
Revolutionary culture is an integral part of the people's democratic revolution. It steels the will of the Filipino people in their political and military struggle against the reactionary state of big landlords and compradors. It fights against the cultural impositions of US imperialism.

LECTURE to the NEW WORLD ACADEMY
Utrecht, The Netherlands
15 November 2013

If the Land Could Speak
If the land could speak
It would speak for us,
It would say, like us, that the years
Have forged the bond of life that ties us together.
It was our labor that made the land what she is;
And it was her yielding that gave us life,
We and the land are one!
But who would listen?
Will they listen,
Those invisible,
Who, from an unfeeling distance, claim
The land is theirs?
Because pieces of paper say so?
Because the pieces of paper are backed by men
Who speak threatening words;
Men who have power to shoot and to kill,
Men who have power to take our men and our sons away?
If the land could speak
It would speak for us!
For the land is us!
This poem reflects a part of the people's culture. It speaks powerfully and poignantly of the peasants' love for the land, the basic aspiration of the peasants who comprise the huge majority of the Philippine population.

I wish to draw from my experience with the masses of peasant settlers in the Philippines, particularly from the island of Negros where I come from.

The peasant settlers were subjected to massive landgrabbing of the lands they had cultivated for generations. Rapacious big landlords, backed by corrupt politicians and the military threatened their existence. This was in the late 1960's when the land frontier in the Philippines was exhausted and the peasant settlers had no other place to go.


In the course of social investigation and educational seminars conducted in their villages by revolutionary activists, they learned systematically about Philippine history and how the Spanish colonialists took over the land and imposed tribute, forced labor and conscription, and how numerous people's revolts were launched. Then US imperialism annexed the country and causing the death of over a million people and thereafter imposed its rule, and after 1946 when nominal independence was granted, US imperialism ruled through local big landlords and compradors.


At the same time, the peasants also imparted to the mass activists their stories about the particular experiences of their ancestors and also how the same historical circumstances and events continued to affect their lives. The social investigation and educational seminars were a mutual learning process for the peasants and the activists who came to bring the revolutionary movement to them.
The study and discussion of Philippine history was enthusiastically welcomed by the peasants. It gave them a feeling of liberation. Now they understood why they were poor. It was not as they were told that it was the will of God that they are poor. It is not true that life is like a wheel, sometimes you are up, sometimes you are down. The discussion of Philippine history gave them a sense of dignity: they are part of a people with an accumulated revolutionary tradition, they are peasants who produce the food of the nation.

The study of the three basic problems of US imperialism, feudalism and bureaucrat capitalism further enlightened them.


The program for a people's democratic revolution gave them a sense of purpose and direction. They said: “Before we were going round and round trying to find our way to a solution. Now, though the way is winding and very difficult, we know it is the right road, to an objective and destination worth fighting for.”


One of the educators and organizers was a 19-year-old nursing student activist, named Ofelia. She was an effective organizer loved by the peasants. In 1974 when she was captured by the military and summarily executed, her body was dumped in front of the municipal building. The peasants carried her body from village to village and composed native songs called komposo in her honor. That area has become a strong base of the armed revolutionary movement.

In the countryside, cultural groups of the organs of political power, with the participation of the peasants and workers, conduct powerful cultural presentations depicting the oppression and exploitation they suffer and their resistance through armed struggle in the people's war.
In the urban areas, during marches and demonstrations of the legal democratic movement, cultural presentations are an integral part of the mass actions. In gatherings of the indigenous peoples, native dances and other folk activities enrich the people's revolutionary culture.

Poetry, paintings, songs and dances, sculpture and other works of art have arisen and continue to arise to enrich the people's revolutionary culture.

In our country, the revolutionary culture of the Filipino people is continuously being developed. It is an integral part of the people's democratic revolution. The people's culture steels the will of the Filipino people in their political and military struggle against the reactionary state of big landlords and compradors. It fights against the domination of the mind, the cultural impositions of US imperialism.


The US imperialists sought to justify their annexation of the Philippines, covering up their scheme of colonizing and exploiting the country and the people and gaining a strategic position to get a big piece of the China market. US President McKinley declared that it was “the manifest destiny of the US to christianize and civilize the Filipinos.”. He said this when the majority of Filipinos were already Catholic.

After crushing with superior armaments the powerful nationwide armed resistance of the Filipino people, the US moved to consolidate its military victory by a wide array of cultural measures to poison and control the mind and thinking of the Filipino people. The US brought in teachers to take charge of the educational system. They distorted the history of the people, branding the people's heroes as bandits, glorified the American way of life depicting the US as the bearers of freedom and liberation.

The US gave scholarships to “pensionados” (subsidized scholars with full allowance) to study in the US and return as favored personnel in the educational system and the entire bureaucracy. At the same time, the US prohibited any patriotic expression such as displaying the Philippine flag. English was made the obligatory medium of instruction in all schools from grade one and upward. It was forbidden to speak Tagalog or any other Philippine language in school.. Coke, Colgate, Kodak, etc were introduced and became generic terms for softdrinks, toothpaste, photo camera, etc. Hollywood movies were popularized, as were Nescafe and basketball. The US developed the colonial mentality, making it the Filipino's dream to go to the United States.


The latest deception by US cultural imperialism is for the US military to pose again as liberators bringing relief goods to the country devastated by natural calamities. US marines, a US aircraft carrier and other warships are moving into the Philippines, into areas of the revolutionary movement, purportedly to provide relief and rehabilitation. This new deception is being met with condemnation and resistance on the ground.. The Filipino people are alerted to these latest devious schemes of US imperialism.


As US imperialism and the world capitalist system fall deeper into crisis, they have resorted to ever more repressive acts of cultural imperialism, using the so-called war on terror to demonize revolutionary movements and leaders and arbitrarily list them as “terrorists.”. These moves of the imperialists are met with worldwide resistance coming from a wide range of revolutionary, anti-imperialist and progressive forces throughout the world.

The revolutionary movement has effectively countered these cultural impositions of US imperialism, both in the broad countryside and in the urban areas. The shackles of the mind imposed by cultural imperialism are being undone by a powerful people's culture. However odds are tremendous as the mass media controlled by the monopoly bourgeoisie continue to purvey the most decadent and extremely crass consumer culture.