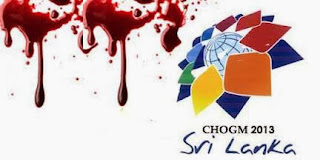 Democracy and Class Struggle says the Final communique of nineteen pages of the CHOGM summit in Colombo Sri Lanka has not mentioned human rights in Sri Lanka at all.

This is Cameron and Hague being exposed again and again for hypocrisy, for talk but no action.

Mass Murderer Mahinda Rajapaksa, is scheduled to assume the role of the chair of the Commonwealth next year thanks to people like these Tory wimps Cameron and Hague.

This is a repeat of the failure of the international community that happened in Sri Lanka in 2009  which come back to haunt the UN with the leak of an internal inquiry commissioned by the Secretary-General.

The independent report concluded that the UN’s own conduct during the final months of Sri Lanka’s civil war marked a “grave failure.”

There was damning criticism of senior staff, who “simply did not perceive the prevention of killing of civilians as their responsibility.”