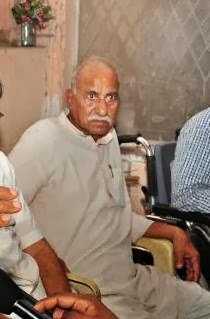 On the 1st of November at 8 pm, RDF’s General Secretary, Rajkishore, was arrested by the Bihar State police at his home in the village of Bakhari in East Champaran now called Motihari District, forced to sign on blank papers, and whisked away to the Madhuban Bazaar Police Station in Motihari town.

Around 150 to 200 armed police personnel surrounded the village of Bakhari, barged into Rajkishore’s house and interrogated him and his family. Rajkishore is seventy one years of age and is ailing from serious medical problems. He suffered a recent injury to his ears and fracture in both sides of his lower jaw when turned unconscious and fell on the flooor. He has been undergoing treatment at the AIIMS in Delhi, is taking heavy medication and is on a liquid diet, and had been advised by his doctors to remain at home for the remainder of his recovery.

Two days after reaching home he was picked up by the state police forces and charged in a case numbered 88 dated to 2005 that concerned an incident in Madhuban Bazaar allegedly involving the CPI (Maoist). The charge includes Indian Penal Code (IPC) 396 ‘dacoity with murder’ and Criminal Law (Amendment) Act Section 17. He has been remanded to judicial custody on case number 88/2005 based on a ‘confessional’ statement made in 2006 by one of those arrested in the Madhuban case.

When he was produced before the magistrate, the state police officials claimed that he will be remanded in 13 more cases out of which 6 cases have been filed in the Madhuban Bazaar incidents in 2005. He was first interrogated at home and forced to sign on blank papers. Then he was taken to the Madhuban Bazaar Police Station where he was interrogated the whole night and the next day. He was then sent to judicial custody. When the police arrested him, they even took his diary and two books from his house which they subsequently returned.

His family was not informed of where he was being taken and on what charges he has been arrested. The police forces, which came in such large numbers, did not bring an arrest warrant with them.

The police have not revealed all the charges against him and have also not announced his arrest for three days. His lawyers in Motihari are currently attempting to find out the nature of the charges.

It is clear this arrest is a premeditated act by the Nitish Kumar state government in Bihar along with the National Investigative Agency (NIA) at the centre. In light of the changing political situation in the country, the Nitish Kumar state government is being blamed by the Congress and the BJP for not implementing the state led war on people codenamed Operation Green Hunt.

In this context, competing with Congress and BJP led state governments, Nitish Kumar government has stepped it brutal attacks on the people and organizations. The paramilitary crackdown in the state of Bihar on people’s struggles and on activists participating in them has escalated over the last few years.

Recently, the Nitish Kumar government has aggressively undertaken a policy to arrest mass activists and leaders, seize their property and the bank accounts of these activists as well as their family members.

The state government is attempting to silence any and all voices that have spoken against Operation Green Hunt by framing them in cases linked with the CPI (Maoist). Old and new cases have been framed and additional charges are being leveled against activists in keeping with the increasingly reactionary laws framed by the central and state governments branding people’s leaders as anti-national or terrorists. 200 such families have been harassed and their bank accounts seized over the last few months.

It is then alleged that these families have members who went underground as part of the movement led by CPI (Maoist). Among them, the families of mass activists have also been targeted. Nitish Kumar asked the Centre to follow and implement the model of arresting and seizing the properties of those families believed to have links with Maoists. In addition to this, the NIA is working closely with the Bihar state government and state police force and particularly in this case of Rajkishore’s arrest their involvement is clear.

Rajkishore has been vocal against the Operation Green Hunt led by the central government and being implemented by the state governments of Bihar, Jharkhand, Chhattisgarh, Odisha, Maharashtra, and Andhra Pradesh. He has been an active part of people’s movements all over the country for the last forty years. He was the founder President of the Krantikari Buddhijeevi Sangh in Bihar. He was in the All India Executive of the All India League for Revolutionary Culture (AILRC) and later became its all India General Secretary.

In 1992, he was one of the founder members of the All India People’s Resistance Forum (AIPRF). In 2005, when a number of progressive and democratic organizations merged to become RDF, he became its all India General Secretary.

In 2012, in the all India conference of RDF held in Hyderabad, he was once again elected as the General Secretary. Over the years he traveled widely across the country and led numerous fact-finding teams and coordinated between people’s struggles across states.

In the recent months as his health deteriorated Rajkishore suffered two blackouts. The second blackout resulted in a fall fracturing both sides of his jaw severely damaging his ears making him bleed profusely for seven days. For this severe injury he had been undergoing treatment in AIIMS for the last month.

It is in this condition the Bihar state police have arrested a well known and outspoken activist and leader of people’s struggles who stood up against the state sponsored war on people called Operation Green Hunt.

The arrest of Rajkishore is not isolated as various activists of the RDF have been targeted by the central and state governments. The recent killing of the Vice President Ganti Prasadam and then the raid and harassment of the Joint Secretary GN Saibaba, the arrest and incarceration of the Executive Members Dandapani Mohanty in Orissa, Raja Sarkhel of West Bengal, Bengal RDF Committee Member Prasun Chatterjee are instances enough to show how the Indian state has been specifically targeting the RDF activists and its leadership.

RDF condemns this arrest in the strongest possible terms and demands his immediate and unconditional release. We appeal to all democratic and progressive individuals and organizations to stand united and condemn his arrest and appeal for his immediate release.

Rajkishore Singh, the General Secretary of Revolutionary Democratic Front was today arrested from his residence in Bihar by the police and was taken to Madhuban district to be booked in a case of 2005 allegedly involving the CPI (Maoist).

Rajkishore Singh, who is in his mid seventies, a leader of the people’s movements against all anti-people policies of the government had gone to his native village in Bihar after a prolonged bout of treatment—almost two months—at the AIIMS trauma centre as well as the AIIMS.

As the general secretary of the Revolutionary Democratic Front (RDF) he has been staying in Delhi to fulfil the responsibilities bestowed on him by the organisation. The said treatment at these hospitals was being done for serious ailments to the heart and brain as he had suffered from intermittent blackouts. A couple of months before due to blackout he had had a bad fall resulting in the fracture of his jaw bone and severe internal injury in both the ears. The doctors were yet to chalk out a systematic track of treatment for the fundamental problems that had been ailing him.

Based on the advice of the doctors as well as his desire to be with his family for some time—as the doctors had advised him to take only liquid food due to severe pain in the jaw while taking solid food and the need for the fracture to get cured with little disturbance—so that proper care can be taken for his deteriorating health. To arrest and frame up someone in a case of 2005 is nothing but political vendetta and deliberate harassment of people’s leaders and activists who have dared to speak against the anti-people policies of the state. It should be noted that Rajkishore Singh was one of the prominent voices who had been protesting against the Indian State’s war on the people of the subcontinent under the garb of development. He had moved the length and breadth of the subcontinent to mobilise people against these policies of outright loot and plunder.

Further to deliberately target him when he is ailing especially with a delicate constitution of his health with the need for constant care and attendance by someone so that he should able to carry on his daily chores without trouble is proof enough to show that this state and it’s lawless police would desperately want such leaders and their political convictions to die an early death. To put Rajkishore Singh behind bars, that too with a deliberate plan to frame him up in several cases, can really endanger his health fatally, especially, at this juncture when he has serious neurological and cardiological illness.

To say the least, the police and the intelligence agencies have once violated every law in their enthusiasm to incarcerate an ailing people’s leader. Moreover with the new regime of laws pertaining to senior citizens in the Indian subcontinent it is shocking to note the apparent apathy of the police and the intelligence agencies to such legal instruments which are definite safeguards for people above sixty from being wrongly implicated by law. Of course all such laws and legal instruments have become the preserve for corrupt and criminal politicians while people’s activists and their leaders are condemned to be incarcerated by hook or crook.

It goes without saying that any serious injury to the health of Rajkishore Singh who is already critically ill will be due to such highhanded and arbitrary actions of the police and intelligence agencies. Given the new regime of laws on senior citizens the lawless police cannot get away from their responsibilities from implementing or being sensitive to the legal instruments that safeguard senior citizens in the subcontinent.

We demand that Rajkishore Singh be released immediately and unconditionally!
In Solidarity,