Philippines: Unite with the people in facing Typhoon Yolanda devastation, carry out temporary and unilateral ceasefire for two months 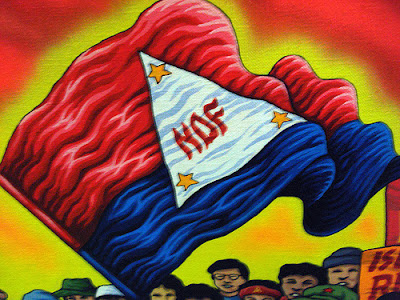 We must care for and lead the masses in overcoming the present situation -- this should be the principal concern of the revolutionary forces in the next 2 to 6 months. We will carry out during this period a temporary and unilateral ceasefire against the reactionary armed forces.

Unite with the people in facing Typhoon Yolanda devastation, carry out temporary and unilateral ceasefire for two months

Eastern Visayas as well other nearby regions only recently suffered an unparalleled calamity. Typhoon Yolanda, which was estimated to have wind speeds of more than 300 km. per hour, lashed the entire length of the region for three to four hours, and caused a 5-meter storm surge that inundated coastas areas. This resulted in thousands of dead, injured and missing, and hundreds of thousands of demolished houses; destruction of important infrastructure for energy, transportation and communication and other public structures; damage to agriculture and the economy in general; mass evacuation of families; and other damage.

In the more than two weeks since the storm, the Aquino government has not fully arrived at an accurate picture of the destruction because it has focused only on the urban centers, while remaining ignorant about the situation in the vaster and more numerous towns. Even foreign observers note there is no organized and systematic government response to the calamity.

The revolutionary forces feel for the masses of the people in EV in the wake of Typhoon Yolanda’s devastation, which comes on top of the sufferings they already undergo under the exploitative and oppressive ruling system. We must care for and lead the masses in overcoming the present situation. In the next two to six months, this should be the principal concern of the revolutionary forces, according to the extent of the gravity of the damage to the life and livelihood of the masses. We will carry out during this period a temporary and unilateral ceasefire against the reactionary armed forces, while maintaining strict security and the readiness all the time to defend ourselves if the enemy attacks.

We call the attention of the Red commanders and fighters under the Efren Martires Command-New People’s Army to the following order of the Executive Committee of the Regional Committee-Eastern Visayas of the Communist Party of the Philippines on 12 November:
The mass movement must be active in carrying out important issues to surmount the disaster. The mass movement must banner the urgent needs of the masses of the people for housing, food, clothing, medicine and livelihood projects for rehabilitation.

The recurring neglect and corruption by officials of the reactionary government tasked with relief operations and funds for the people must be denounced.

Campaigns for production and cooperation must be carried out. The rising prices of the people’s basic needs must be protested, especially that of food as well as gasoline, electricity, LPG (liquified petroleum gas), medicine, housebuilding materials, and others.

There can be many courses of action. There can be various local ways of community spirit and cooperation (tiklos, aglayon, pintakasi), building houses and the restoration of public structures. Organized demands must be pushed through, such as calling for the Aquino government’s action towards solving the problems of hunger, thirst, illness, and other results of Typhoon Yolanda. Mass actions must be carried out against the higher costs of not only food but also gasoline, transportation fares, electricity and others. Mass campaigns for planting must be carried out, especially those which could immediately yield results, as well as work-for-cash. There must be mass actions against militarization. Depending on the hotness of the issue, there can be mass actions at the municipal or inter-municipal level.

Documentation must be carried out to ascertain the severity of the damage caused by the storm, such as the dead, injured, destroyed homes, and also farm animals, agricultural crops and infrastructure, as these will serve as the bases for mass campaign struggles.

The Party, NPA, and the mass organzations must be united about the urgency in jointly addressing this issue as their primary concern. The mass movement is the key means towards solving the problems caused by the storm, thus we must reinvigorate this along with closely monitoring and guiding. The Party members at the basic level must lead the way in the mass movement and serve as examples to the people in serving and leading the masses. The people’s army must particupate in the production for food and in joining hands in repairing and building houses and the restoration of public structures.

The calamity victims and the people must do propaganda actively. They must condemn the Aquino government’s obliviousness, superficiality, hypocrisy in aiding the victims, and looting of government calamity funds and humanitarian aid from abroad, The price hikes of basic goods and services must be protested. In the face of natural calamity, the inutility and corruption of the Aquino government can be further exposed and linked to issues such as the pork barrel scandal.

The Aquino regime must be slammed for its militarist approach to the problems of hunger, thirst and sickness, as well as the continuation of military operations in the countryside. The Aquino regime must be held accountable for its arrogance and derision of the people’s desperation and in showing armed force rather than humane aid. The Aquino regime’s psywar vilification of the revolutionary movement must be exposed and opposed, such as its claims of harassment of the relief convoys and the allegations of taking advantage of the calamity to sow chaos. The regime is doing these to gain the upper hand and mislead the people that it is taking care of the calamity victims. The US must also be condemned for taking advantage in sending warships, including those with nuclear weapons, on the pretext of aiding the calamity victims.