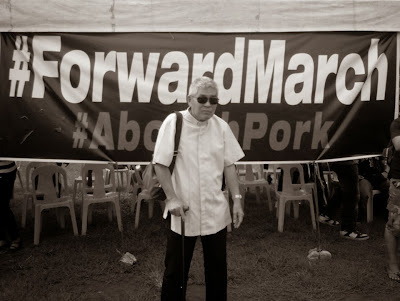 Fr. Joe Dizon’s name is now etched into the granite stone of the Filipino people’s gallery of heroes and martyrs, where it will inspire future generations to dedicate their lives to the struggle for national and social liberation and the struggle to end oppression and exploitation.

The Communist Party of the Philippines (CPP) expresses its deep sense of loss over the death of Fr. Joe Dizon. He passed away last night at the age of 65.

The leadership and entire membership of the CPP pay tribute to Fr. Joe Dizon, revolutionary Catholic priest, patriot and humble servant of the working class and the toiling masses.

He was among the pioneer organizers of the Basic Christian Community in the 1960s which put into practice the progressive Catholic social teaching of having preferential option for the poor. Such an advocacy was being advanced by the Christians for National Liberation (CNL) against the traditional leadership of the Roman Catholic Church. Like many priests infused by the spirit of serving the people, Fr. Joe helped organize urban poor and workers communities.

By being with the workers and peasants, Fr. Joe knew firsthand their travails and sought to change their situation and improve their wellbeing. He championed their national democratic aspirations and became tempered in their struggles.

Confronted with the people’s enemies, Fr. Joe was militant and courageous. He organized workers defying the threats of the big capitalist compradors. He founded the Workers’ Assistance Center in 1995 based in Dasmariñas, Cavite. The WAC extended help to the workers inside the Cavite Export Processing Zones, who were among the most oppressed and exploited. Fr. Dizon was a trailblazer in building various types of workers associations and unions within the EPZs, where factories are run like Nazi prison camps by big foreign capitalists in cahoots with the military, police and government bureaucrats.

He joined the people in mass demonstrations and immersed himself in workers’ picketlines and peasant communities. Under Martial Law, he was among the people in their struggle to overthrow the US-Marcos dictatorship. He was among the stalwarts in the people’s uprising of 2001 which brought down the Estrada regime. He was a vocal critic of the Arroyo regime and vigorously denounced the Arroyo regime for widespread corruption and cheating in the 2004 and 2007 elections.

Fr. Joe was among the convenors of the group Kontra Daya which exposed various forms of electorial fraud through the automated counting system, including the 2010 elections which brought the current Aquino regime to power. Recently, he was among the leaders of the broad movement against the Aquino regime’s pork barrel system.

Fr. Joe was an advocate of human rights and social justice. He firmly opposed US interventionism in the Philippines and actively joined efforts to bring progressive and patriotic thought into the Catholic Church. He was among the convenors of Solidarity Philippines and the Clergy Discernment Group, which sought to encourage priests, nuns and religious workers to advance the cause of social justice.

He will be remembered as among those who carried forward the revolutionary tradition among the Filipino clergy, pioneered by Fathers Gomez, Burgos and Zamora (GomBurZa) who stood up against Spanish colonialism, and carried forward by the likes of Frs. Pops Tentorio and Willhelm Geertman who dedicated and sacrificed their lives serving the masses, and revolutionary martyrs Frs. Frank Navarro, Fr. Zacharias Agatep and Fr. Nilo Valerio who marched the path of the people’s war and dedicated their lives as armed fighters of the people.

With his demise, Fr. Joe Dizon’s name is now etched into the granite stone of the Filipino people’s gallery of heroes and martyrs, where it will inspire future generations to dedicate their lives to the struggle for national and social liberation and the struggle to end oppression and exploitation.
Posted by nickglais on 11/08/2013 02:42:00 PM

A great life. Will inspire us all to similarly live our own.
Stan Swamy
India