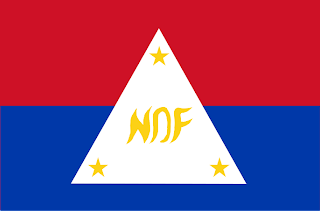 The AFP leadership is completely oblivious to the state of calamity and difficulties being experienced by the people of Negros... According to the commander of the AFP's 303rd Infantry Brigade, they have been carrying out offensive maneuvers in Kabankalan for two weeks now.
MEDIA RELEASE
By CPP Information Bureau
18 November 2013


The Communist Party of the Philippines (CPP) condemns the Armed Forces of the Philippines (AFP) for waging relentless offensives against the New People’s Army (NPA) in the Visayas amidst the widespread devastation caused by the recent supertyphoon Yolanda and the ceasefire declaration issued by the CPP to the concerned NPA units.

News reports state that the AFP offensives resulted in at least two successive armed encounters last Saturday between a unit of the NPA and the fascist troops of the 47th Infantry Battalion at around 9:30 am in Sitio Pating, Barangay (village) Magbalyo, Kabankalan City in Negros Occidental.
According to the commander of the 303rd Infantry Brigade, the AFP has been carrying out offensive maneuvers in Kabankalan for two weeks now.

“It is apparent that the AFP leadership is completely oblivious to the state of calamity and difficulties being experienced by the people of Negros,” said the CPP.

The Negros Island is among the worst hit areas during the 8 November typhoon. In Negros Occidental, record-strong winds destroyed nearly 25,000 homes and resulted in widespread damages to crops, livestock, and fisheries resources initially estimated at P100 million.

NPA units in Negros, including those which figured in an armed encounter with units of the 47th Infantry Battalion, have gone on active defense mode in order to extend assistance to calamity victims. This is in line with the ceasefire declaration issued earlier by the CPP on 14 November.


The CPP ceasefire declaration, which covers NPA units in typhoon-hit regions including those in Negros Island, will remain in effect until 2359 hours of 24 November. The declaration directs concerned units of the NPA to concentrate on the immediate task of assisting the typhoon victims to carry out rehabilitation and reconstruction efforts while cautioning Red fighters against hostile movements of the APP within the territory of the people’s democratic government.


The Aquino regime has yet to issue a parallel declaration. “It is apparent that the Aquino regime does not want to reciprocate the CPP’s issuance of a ceasefire declaration because it does not want the AFP to cease its offensives against the NPA in the vain hope of meeting the targets of its Oplan Bayanihan war of suppression against the people.”


“The continuing offensives being carried out by the AFP underscore the Aquino regime’s mispriorities and criminal ineptness in preparing for and confronting the effects of the recent supertyphoon,” said the CPP. The CPP pointed out that the AFP also carried out offensives in Sorsogon province a mere four days after typhoon Yolanda.


“The AFP is also busy spreading false information claiming of armed actions by the NPA within or near disaster areas in order to justify increasing its deployment of troops to carry out surveillance, suppression and offensive operations against the people and their mass organizations,” added the CPP.


“Aquino’s failure to declare a ceasefire furthermore exposes the hypocrisy of his regime’s call for national unity,” added the CPP.


“Aquino’s call for unity is a desperate effort to cover-up its criminal incompetence and gross failure to prepare for the supertyphoon and mobilize emergency relief which has resulted in unnecessarily large number of deaths and injuries.”
Posted by nickglais on 11/18/2013 10:53:00 AM