Prachanda hoisted by his own petard - Nepalese Elections have a Shakespearean Tragic Epic dimension. 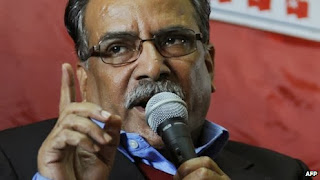 Renegade Prachanda
Democracy and Class Struggle says the Nepalese Elections have a Shakespearean Tragic Epic dimension.
Hoisted with his own petard* Prachanda

She intended to murder her brother but was hoist with her own petard when she ate the poisoned food intended for him - Hamlet.

OK we know what hoist by own petard means.

Prachanda one of the prime movers of the rigged elections in Nepal is now ...crying foul has his UCPN "Cash Maoist" Party is headed for humiliating defeat in the elections and is discovering boxes of votes disappearing and is being hoisted by his own petard and has called for ballot counting to stop.

The Communist Party of Nepal - Maoist which led the 33 party alliance against these fraudulent elections in the first place has been more than vindicated in its stand against these elections but you hear none of this on the BBC or Indian Media who hail a success - while we expose a fraud.
Red Salute to Communist Party of Nepal - Maoist, our comrades for exposing the whole corrupt edifice that is the Nepalese State and the renegade Prachanda.

The poison of the Nepalese Elections was meant to finish of the revolutionaries of the Communist Party of Nepal- Maoist and the 33 party alliance.

Instead Prachanda has swallowed his own poison of the rigged elections in this new Kathmandu Shakespearean tragedy.

* A petard was a small bomb used to blow up gates and walls when breaching fortifications, of French origin and dating back to the sixteenth century

An added bonus to the successful boycott campaign has been the collapse of reformist,revisionist, lal gaadar Cashists.We've all been chortling at Dahal's cry-baby 'we wuz robbed' press conference. He thought he could use the people to climb above them and if there is one good thing to come to out of all this, it is to see hubris brought low.