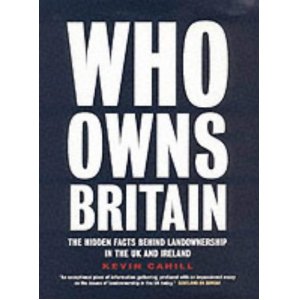 Information on land ownership in Britain is not easy to come by. Kevin Cahill discovered this when researching for his book, Who Owns Britain (Canongate, 2001), from which much of the information contained here is drawn. Thus, the Land Registry, in existence since 1925, has managed to register not much more than half – and what’s missing is the land owned by the rich.

However, during the course of piecing together information from press cuttings, and records of wills and estates, Cahill heard about a ‘second Domesday Book’, a report submitted to Parliament in 1876. He asked the Royal Agricultural Society if they had a copy. They assured him that there was no such thing. In fact, as Cahill discovered later, the Society possessed several copies in its library. The Country Landowners Association at least admitted to having a copy but refused to let Cahill see it. Eventually he was able to obtain a copy of extracts from Ealing library, and later a view of the whole thing in the Devon and Exeter Institute.

The Return of Owners of Land, contains the names, addresses, acreages and valuations for all landowners of over one acre. As Cahill put it, ‘the UK’s large landowners had been appalled by its appearance and moved, with their academic friends, to bury it. In this endeavour they were eminently successful, with nothing of significance written about it in 126 years…. It had, in effect, vanished’. Having rediscovered it, Cahill was able to trace most of the missing estates, and in many cases discover their current owners.

He found that just 189,000 families own two-thirds of the UK’s 60 million acres, of which nearly three-quarters is owned by the top 40,000. The biggest individual landowner turned out to be the Duke of Buccleuch with 277,000 acres, and the wealthiest was the Duke of Westminster with 140,000 acres, including 100 acres in London’s Mayfair – which alone, in 2001, was valued at £3.35 billion – as well as 200 acres in Belgravia, its even more expensive neighbour. Land owned and controlled by Britain’s Royal Family, comprising the Crown Estates, the Duchies of Cornwall and Lancaster, and private land, amounted to some 677,000 acres. Meanwhile, Britain’s 16.8 million homeowners accounted for barely 4 per cent of the land, about the same as that owned by the Forestry Commission, the top institutional landowner. But Cahill still could not account for some 5.6 million acres, or nearly 10 per cent of Britain’s land area.


Most of the big private estates can be traced to appropriations and handouts from the reigning monarch in bygone days, and more recently through purchases by those who had made money through large-scale theft in other ways. The ‘first great land grab’ came with the Norman Conquest when William donated the lands acquired to himself and his brigands. The second came when Henry VIII dissolved the monasteries, and distributed their 10 million acres to those followers and barons willing to accept the new Church, now free from domination by Rome, and impose it in their local areas. Thirdly, some major redistributions and awards of land according to political allegiances took place during Cromwell’s rule and following the Restoration, which more or less settled the broad nature and ownership of Britain’s land through to the present time.

Private ownership of land in Britain was consolidated further between 1700 and 1900 when common land used for grazing was incorporated into private estates through the various Enclosure Acts pushed through Parliament by the big landowners themselves or their representatives. Most freeholds of owner-occupied houses and businesses that exist today derive from the big landowners cashing in from selling off small parcels of their land to property developers.
[

Excellent. Is there any possibility of breaking this down into a Welsh/Wales perspective?

That is what we we doing at the Great Unrest Group for A Welsh Scocialist Republican Party - We have a Commission working on the Land Question in Wales - we need more people to work on our Land Commission, we have a Political commission and a History commission.