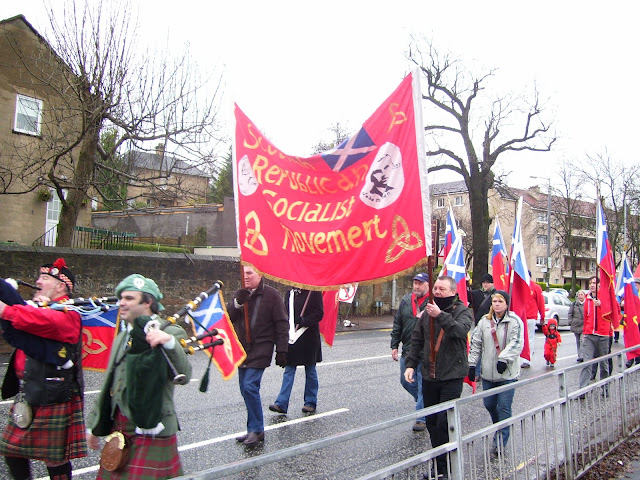 I am Alan Stewart. I am a member of the Northern England branch/commun of the Scottish Republican Socialist Movement.


I welcome you to this John MacLean Commemoration.

John MacLean is talked of as Scotland's favourite Socialist Saint.

But why is he so important? Why did we commemorate him? Why do we remember him?

We remember him firstly as an internationalist. The first Soviet Consul in Scotland. He ran a consulate in Portland Street in the Gorbals.

The Post Office refused to deliver the mail and the state wanted it shut but MacLean fought on..admired by Connolly.

We remember him as a pioneer in working class education. He himself got an MA through evening study. Later he and colleagues ran scores of classes in economics. He went on speaking tours. He wrote pamphlets. All the time spreading socialist ideas.

We remember him as an exponent of working class self organisation. Organising the unemployed. At the fore in the Clyde Workers Committee. Backing striking women workers in Neilston. All the time taking the fight to capital.

We remember him as a principled opponent of imperialist wars. He went to prison several times because of his steadfast opposition to the slaughter of World War One.

The first was at Nelson's Column on Glasgow Green. At first the anti-war movement was small but it grew.

And finally, given what is happening today, we remember him, like Connolly as someone who recognised the intextricable link between the demand for socialism and the demand for national liberation.

The national question -the right to national self determination- was a democratic demand at the heart of socialism. Not an irrelevance or an add on.

We will be marching shortly to the MacLean Cairn.

There will then be a rally and social at the Shawbridge Tavern.

Thank you comrades for your support.

All Hail the Scottish Workers' Republic!

Our solidarity with you is to is to to build a Welsh Socialist  Republican Party that can provide social as well as national liberation for the People of Wales.