It's Time For the People to Speak Up ! Statement from Greece from KOE 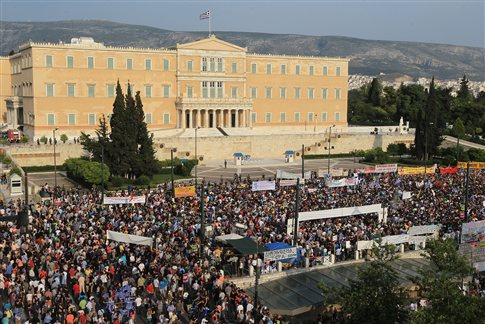 Today, Tuesday 6 November, starts a new 48 hours general strike and a new round of popular mobilizations against the pro-troika government of Mr. Samaras, PM and leader of the right wing “Nea Dimokratia” party. Two days ago, Alexis Tsipras, addressing the Parliamentary Group of SYRIZA, called the people in a united non-violent revolt in order to overthrow the illegitimate government that sells-out the whole country, serving the interests of the IMF-EU-ECB troika and of the bankers. The three parties that support the actual government (Nea Dimokratia, PASOK and “Democratic Left”) have duped a part of the Greek people in the last elections advancing a program of “renegotiation” with the troika, which they never attempted. Instead, they have accepted without any “renegotiation” even new and more catastrophic measures imposed by the troika in the form of “Memorandum 3”.
The political crisis is deepening, penetrating even the three pro-troika parties, with some of their MPs already abandoning them and declaring that they will not support Memorandum 3. The international dimension of this crisis is revealed also by the contradictions now publicly expressed between the imperialist forces, with the USA and Germany quarreling about the “appropriate solution” for Greece. At the same time, the social catastrophe takes unprecedented dimensions, with the unemployment rate over 25% according to the official statistics (over 55% for the youth) and a quarter of the population trying to survive below the poverty line.
Hundreds of thousands of households are now unable to cover their basic needs (payment of electricity bills, supply of heating oil, and even food…). Schools, hospitals and other social services are shut down or “functioning” without the minimum necessary personnel and supplies. The national sovereignty is shred apart, with the troika personnel dictating to the “government” all the resolutions and requesting the control of the public funds in order to “pay back the creditors”. The repressive mechanisms, together with the fascist gangs, are trying to terrorize the people with mass “preventive arrests”, torturing in the police stations and attacks against the left and progressive people.

The Communist Organization of Greece (KOE) calls our fraternal parties and movements, all the friends of the Greek people who is bravely fighting for Democracy, Independence and Emancipation during almost three years now, to express their solidarity in any possible form!
Follows a Statement of KOE published on 2 November 2012:
Memorandum 3 must be rejected, the government must be overthrown:
It is time for the people to speak up!
The tripartite pro-troika government of Mr. Samaras is faltering under the load of its criminal subservience to the Memorandum policy. Its humiliation during the voting of the bill for the sell-out of public wealth, where the government block did not manage to gather the absolute majority that it supposedly has in the Parliament, the continuous retractions and the theatrical manipulations about the measures, including their supposed “negotiation” with the troika, the continuous parliamentary coup with the “fast-track procedures of voting” and the repetitive violations of the regulations, the deepening decomposition of PASOK and the intensive internal turmoil in the “Democratic Left”, the references to the possibility of a military coup, the silencing of the dissent by the mainstream Media and the censorship incidents, all show clearly that: The pro-Memorandum block is trembling due to its alienation from the will of the vast popular majority.
They cannot continue the social holocaust and the complete sell-out of Greece undisturbed, exactly because the policy of destruction of our country is encountered constantly by the popular resentment and range. They cannot remain in place relying based only on the external troika and by writing off even their own declarations, disregarding the popular will.
The pro-troika government is dangerous for the people and the country. It has no reserves, it does not hesitate to use any means in order to continue its destructive work, serving loyally its foreign masters and the local cleptocracy. As long as this government’s life is extended, the future and the very existence of the country will be jeopardized, together with any hope for the people to live with dignity and freedom, and to maintain even today’s maimed illusion of democracy and sovereignty.
For all these reasons, it is of vital importance for the people that the new Memorandum 3 shall not pass through. It is of vital importance to overthrow the government of Samaras and its collapsing partners. It is of vital importance to put an end to the troika’s domination and the special regime that it has imposed on our country.
A political transition of the people and by the people, opening up a new page for the country, is today feasible! With the massive democratic alert and popular uprising, by escalating the political struggle against the internal and external troikas! The next days are crucial: The demonstrations and strikes, the encirclement of the Parliament, the constant presence in the streets, all must lead to the flooding of the river that will drown all those who are driving the people to despair and the country to suffocation. For the Left, and especially for SYRIZA, it is time to take up its responsibilities. It is time for political initiative, calling the people to speak up and avert the catastrophe. It is time for calling for coordination of all the left-wing, progressive, democratic and anti-memorandum patriotic forces, of all the political and social forces that seek a way out for the country: A big political change that will open up the horizons towards genuine democracy, productive reconstruction, national independence and popular sovereignty.
Join the struggle! Popular Uprising !
Posted by nickglais on 11/06/2012 02:44:00 AM