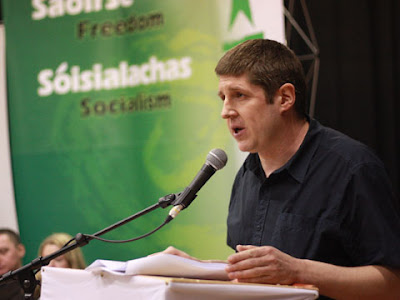 Picture of Brian Leeson of Eirigi


Democracy and Class Struggle calls for the immediate release of Brian Leeson  !

Although his arrest is in Dublin we suspect the Irish Republic's Political Police and British MI5 are working together to undermine Eirigi's' success throughout Ireland.

We have always admired Eirigi's creative anti austerity campaigning throughout Ireland - we call for end to  Political Policing  north and south of the Irish border - free Brian Leeson Now !.

Make yourself aware of the recent publications and videos from Eirigi exposing Special Branch and MI5 activity here . A Recent Eirigi video is here :


Brian Leeson, the leader of an Irish republican group which left from Sinn Féin has been arrested at his home in Dublin.

Éirígí does not have an armed wing but has a reputation for taking part in confrontational protests on both sides of the border.
An Éirígí activist has confirmed toChannel 4 News that the republican group's leader was arrested but claimed they had little information on the possible motivations for the arrest.
Brian Leeson is a former prominent activist with Sinn Fein. He led a breakaway from the party in 2006 and took a number of dedicated activists with him.
Councillor Minihan, who is the group's only elected representative in the republic of Ireland, told Channel 4 News that she believes the move is "political policing at its best" and say the group's high profile protests have made them a target for police.
The Dublic City councillor stressed that the organisation is a legitimate political party and has no idea why their leader was arrested.
Irish police have said they will not comment on individual cases.
Members of Éirígí came out to lead protests during the Royal visit to Dublin last year, beheading an effigy of the monarch outside the GPO, and last July Cllr Minihan was jailed having refused to pay a court imposed fine after throwing paint at the house of former Minister for Health, Mary Harney
.
The group has been associated with prominent dissident republicans like Colin Duffy, Dominic McGlinchey junior, and convicted Massereene barracks murderer Brian Shivers, who had attended their meetings.

The group's Cork branch confirmed their leader was arrested and called for activists to gather outside the police station where they believe he is being held.
"Éirígí Chairperson Brian Leeson was arrested last night at his home by political police.

Éirígí is holding a protest at Lucan Garda Barracks at 8pm tonight," the group's Facebook read.

See Also : Secret Justice no Justice at All here :
http://www.eirigi.org/latest/latest241112.html