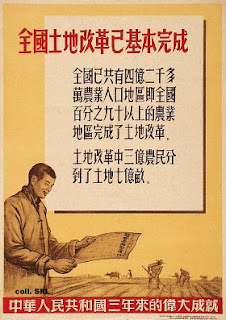 "The ownership of land rights have been silently stolen from the natural village and invested in a higher level..to date there are not many conflicts , because farmers are not well imbued with the idea of "property".But problems are sure to arise in the future"

Sheng Li of the Chinese Ministry of Agriculture in 1999.


All land in China is publically owned , either by the State or "collectively" ie by lower administrative levels. The ownership of collective land , however "can be changed into State ownership, if the proper procedures are followed"

During the time of Chairman Mao these lower administrative levels were called (in decending order) "the peoples commune","the production brigade" and the "production team"

Since decollectivization in the 1980's the brigade is now called an administrative village and the production team is a natural village.

So what has changed other than names ?

In Chairman Mao's time a 1962 Law popularly known as the 60 Articles , guaranteed, in the words of Peter Ho that collective ownership was invested in the lowest level: the production team - ie the village.

When this system was abolished  under decollectiviztion in the 1980's, the government was worried that there would be "large scale social conflict over claims from the collective past".

So rather than reaffirming the right of what is called the natural village to own the land they fudged the whole issue.

Peter Ho says that collective ownership of land is not defined at all.

Neo Liberal economists have long advocated the privatisation of land in China, and the creation of a market in State owned land is a move in this direction.

But Peter Ho's analysis suggests that the peasantry would best be served by shoring up the legal status of collectively owned land at the natural village level giving the peasants a better legal basis on which to resist Land Grabs by the Capitalist State.