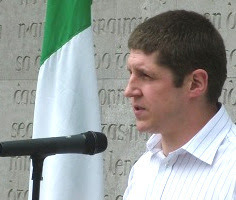 The socialist republican party, éirígí, has condemned the arrest and continued detention of the party’s national chairperson, Brian Leeson.

Leeson was arrested by gardaí at his home late on Tuesday evening.

In a statement strongly condemning Leeson’s arrest and detention, the party’s general secretary, Breandán Mac Cionnaith said, “Brian Leeson was arrested at his home by gardaí late on Tuesday evening.

“Neither the party nor Brian’s family are aware of any reason why the gardaí should have chosen either to arrest or continue to detain him.

“However, it is clear that some sections of the press have engaged in ill-founded comment in relation to Brian’s arrest in terms that can only be described as highly sensationalist speculation. Such coverage is undoubtedly and quite obviously highly prejudicial.

“Brian has played a central role in organising opposition to the austerity policies being implemented by the Fine Gael/Labour Coalition in Leinster House.

With further austerity and anti-working class measures due to be announced within the next few weeks, we are of the view that this arrest and the accompanying coverage by some media outlets is designed to undermine opposition to this forthcoming budget and to attack our party.

“We also believe that it is more than just mere coincidence that Brian’s arrest came just over a week after the party voted at our annual Ard Fheis to contest local government elections in the 26 Counties.