The Committee to Support the Revolution in India welcomes the holding of the International Conference in Support of the People's War in India. 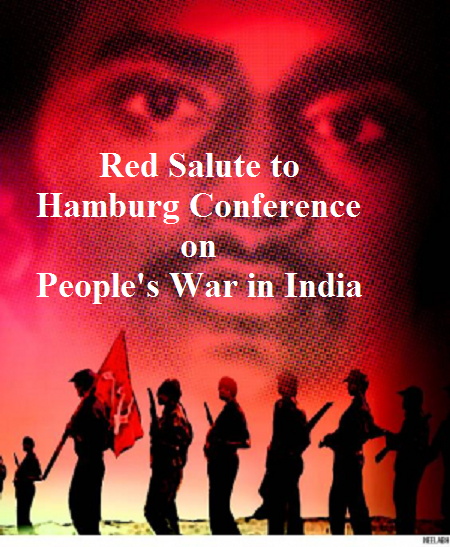 The Committee to Support the Revolution in India welcomes the holding of the International Conference in Support of the People's War in India.

Our Committee was formed in September 2010 following the formation of the International Committee to Support People's War in India.

Since the foundation of our Committee, we felt it was important to make know as much as possible the People's War in India in different segments of the population, as the media of the ruling classes do almost no information. Only a few organizations, some Internet sites or blogs like ours produce articles, publish photos and reports.

We have participated in the solidarity week of April 2011 and January 2012. Where organizations were already sensitized, we organized meetings and pasted posters in neighborhoods, universities and factories where we usually intervene.

This year, in preparation for this Conference, comrades from Maoist Communist Party of France, from the FRAP and from RCP-Canada have distributed thousands of leaflets and pasted hundreds of posters at the Festival of Humanite [attended by 650 000 people], in several universities, in indo-Tamil peoples neighborhoods of Paris and its suburbs.

We realized and exposed information notices on the People's War in India. This gave us the opportunity to discuss with many people who stopped to inform themselves.

We did not know that this was happening in India was often their first sentence, which encourages us to increase and improve information about this so important struggle at the international level.

In Toulouse, a few days before the conference, an initiative was organized by the Marxist-Leninist Communist Organization Proletarian Path.

For our Committee, supporting the People's War in India is opposing our own imperialism. That is why we contacted the factory workers from Michelin in Clermont-Ferrand who opposed the implementation of a Michelin plant in Tamil Nadu. A concert-meeting should be held in this city in the coming months thanks to young comrades of the Marxist-Leninist Communist Youth and the Occitan revolutionary organization "Libertat".

We do not see this conference as an end but as a beginning to expand our activity to all who are willing to support the People's War in India. That is why we plan to organize other meetings in other cities after this conference, because the activity of the committee and the other initiatives of other comrades or forces ready to promote and support the people's war must continue in order to amplify as much as possible this solidarity.

People's war in India is a support to the struggle of other peoples of the world, so it should also be made known to those who struggle in other countries for the same purpose : the national and social liberation.

We believe that this conference will have positive repercussions for boosting international support for the People's War in India and through our work, the echoes of the Comrades struggle in India will reach the heart of the factories, neighborhoods and universities around the world.

Lets draw revolutionary inspiration that comrades in India are bring us to feed the just revolt of the peoples around the world and transform it into a revolution.

SOLIDARITY WITH THE PEOPLE'S WAR IN INDIA  !

Committee to Support the Revolution in India