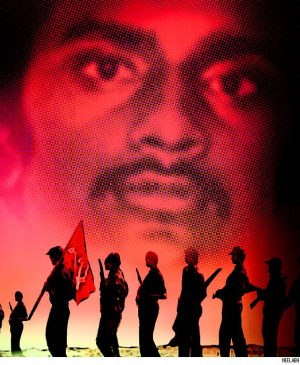 We the undersigned organisations and publications salute your Conference in Hamburg on the 24th November 2012 and wish you success in raisng support and understanding of People's War in India throughout Europe and the World.


The area of central and northeast India from Bihar which borders Nepal to Andhra Pradesh constitutes the Red Corridor of our Maoist Revolutionary Comrades in India, some forty percent of rural India.


This area is a forested and jungle area of India and it also happens to be the area where the poorest and most hunger stricken area of India which according to Binyak Sen and Arundhati Roy should be declared famine zones by the Indian Government.


However the Indian Government has chosen food has a weapon of war to fight the Maoist and Adivasi rebellion.


This area of the Red Corridor also happens to have rich mineral resources like coal and iron ore, bauxite, gold and diamonds. The Indian Government and State Governments has signed hundreds of Memorandums of Understanding ( MOU’S) with Multi National Corporations and Indian compradors selling both land and resources under the feet of the indigneous people who live there.


Our Maoist comrades have operated in this area for decades ,originally as separate groups like Peoples War and Party Unity and Maoist Communist Centre. They have long campaigned for the defence of the Indigenous Adivasis.


The Unified Maoist Party party in 2004 launched a new campaign against the Multi National Companies and the Indian Compradors.


In vast swathes of India brave Maoist comrades are defending the Adivasis people against the Genocidal onslaught of the Indian Government's Operation Green Hunt.


This is an Indian Government that would happily starve its Adivasis population to death so it can steal the minerals and resources for the MNC’s and the compradors.


We have already seen the murder of revolutionary comrades like Comrade Azad an Comrade Kinshinji by the Indian comprador State - their names are already written into the ongoing Liberation story of India and will be reverered by future generations just like Manmohan Singh and Chidambaram will be reviled for their national and social betrayal of the Indian People..


Success to the  Hamburg Conference;

Success to the People's War in India.