Against Capitalism: To Exist We Must Resist by Comrade Kevin Rashid Johnson 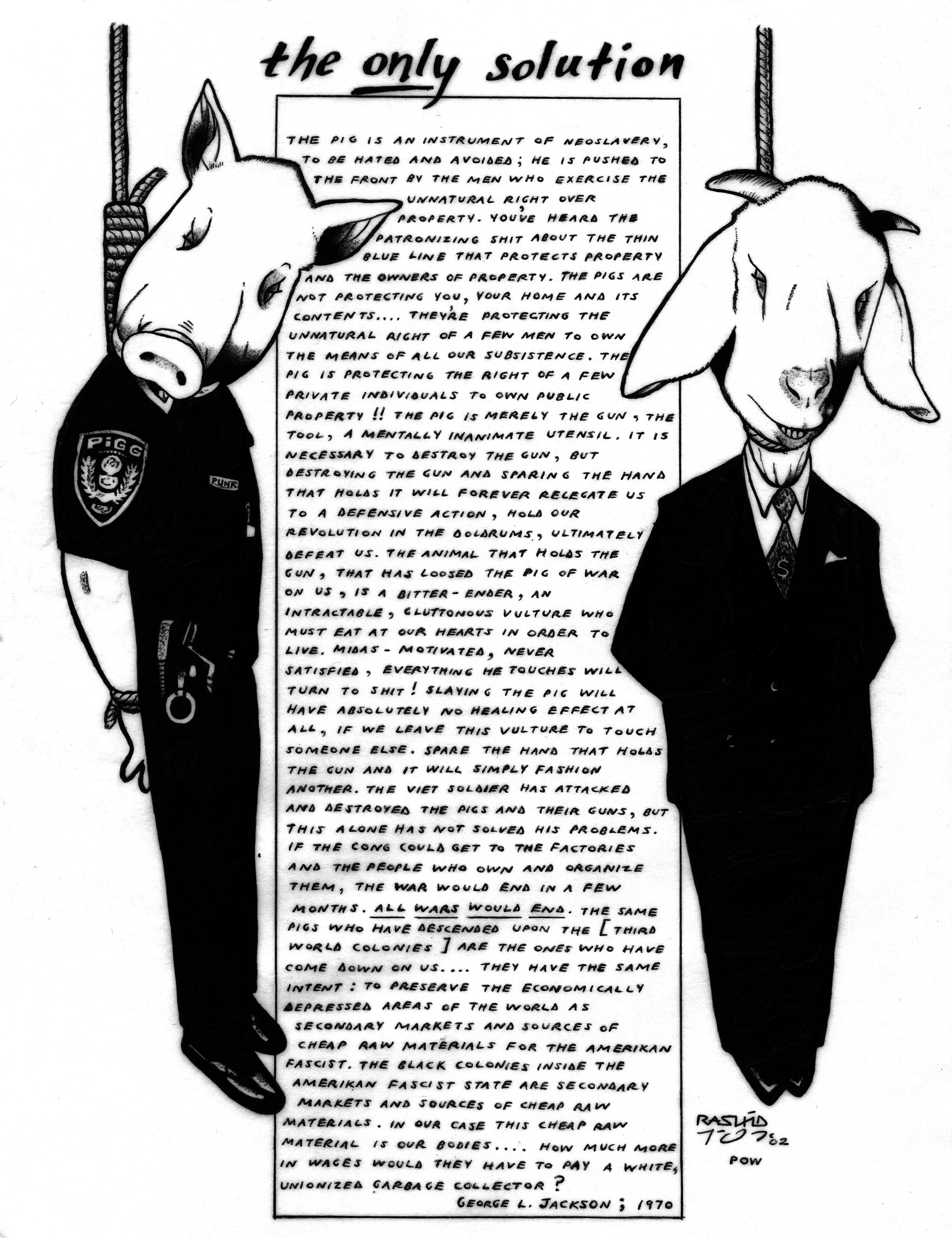 Capitalist logic proclaims no one has the right to exist, to be here, except the wealthy. This illogic inheres in the very system itself. Early capitalist economists like Thomas Malthus and David Ricardo expressed it without shame. They explained, in a world ruled by capitalism only the rich have rights.

Everyone else exists solely to serve them; to enhance their wealth. Those of no profitable use should receive nothing. For sharing their wealth would only lead to the wealthy’s own impoverishment; making them equals of the common people, which was unthinkable.

Therefore, according to Malthus, those sad unprofitable souls, whom he deemed a surplus population, should just “go somewhere else.” [i]

Like to a prison labor camp or to some distant land. Ricardo explained that these are unalterable capitalist principles, “the principle of gravitation,”[ii] as he called it. For those unable to “go somewhere else,” it was proposed that they be disposed of by artificially created plagues, wars, and famines. 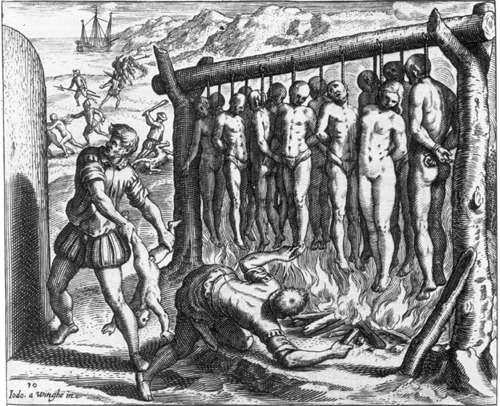 In those early days of capitalist development, Europe was sending expeditionary forces throughout the non-European, non-capitalist, world searching out new bases to set up shop, newer sources of wealth, profit, and plunder. These were found in the Amerikas, Afrika, Asia, Australia , and so on. This expansion called for conquering the indigenous peoples of these “new” lands, subduing and putting them and their lands to profitable uses; requiring that some millions be displaced here, while other millions corralled there, that some millions be enslaved in other places, and other millions be outright exterminated.

All carried out with the utmost brutality. Clearing those lands of their native peoples in turn provided that “somewhere else” for Europe ’s unprofitable poor to go. But these lands were quickly overrun and subjugated by the invading hordes of Europe’s poor, and those who overflowed her prisons, along with her freebooters, mercenaries, missionaries, merchants, aspiring wealthy, and, of course, many who were already accomplished in wealth and privilege.

And soon, capitalism cast its grisly shadow across the globe: expanding into imperialism. Its victims resisted the forced implantation of a system that put profiteering for a few over the needs of the many. But with the combined power of the world’s stolen wealth and technologies, a mass of European invaders united under a manufactured “master race” philosophy, and driven by an insatiable and compassionless greed, the predatory capitalist system won out; and its insane logic took hold everywhere.

And as in Europe, the unprofitable ‘surpluses’ of native peoples were repeatedly driven “somewhere else”, until with capitalism spreading like a plague, they were cornered with nowhere else left to go.

Alongside wars, plagues, and famines, the cycle of extermination and corralling masses of people into prisons and economically unviable urban enclaves (ghettos and shantytowns) and reservations continued, also negating the right of the common people to exist. Running its course, capitalism overran, polluted, degraded and razed the land, also negating the right of the natural world to exist.

Today we approach the endgame. The deadly cycle has spiraled continuously until now everyone’s existence (including that of the foolishly self-centered wealthy), and the balance of nature are compromised. Capitalism’s chickens are definitely coming home to roost. Yet, the harebrained capitalists still persist.

For those whose forefathers encroached upon, and who today have inherited from the land, wealth, labor, and destroyed the lives of billions; for those who yesterday participated or were silent and tacitly acquiesced when in the name of expanding profits and seeking out wealth in new lands, whole societies were crushed and the land defiled; today fate is coming full circle.

You now stand to suffer loss of your own prized civilizations and cherished lives, but on a vastly greater scale, since now nature itself is resisting the excesses of capitalism. And nature has the decided advantage, since she is the very source of all our existence. And unlike people, she doesn’t discriminate. She sees neither skin color, nationality, nor status.

She’s ruthlessly indifferent to age, gender, sexual preference, and such. She crushes, burns, freezes, and sweeps away whatever – and whoever – stands in the way of her restoring the natural balance she evolved over billions of years, which we as tools of fools have upset in only a few centuries; more so in just the last hundred years. And because the damage we’ve caused and the system we’ve implanted is global in proportions, today we don’t have the option to “go somewhere else”. We’re painted into a corner. But there is a choice. 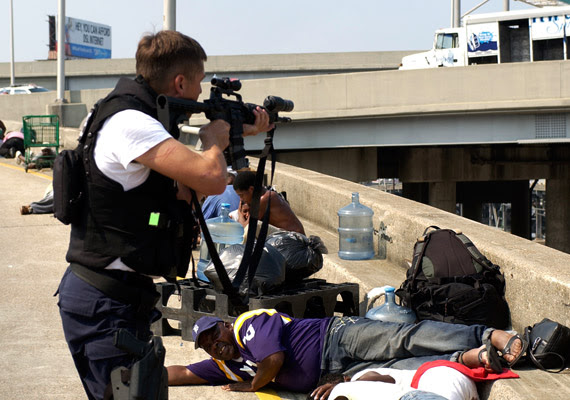 Us Against Them or Nature Against Us All

Collectively and of our free will we can choose to put down this predacious system a few profiting at all our expense, and build in its place a new mass-oriented socialist system of mutual cooperation, fair and equal distribution, and respect for nature, to all our benefit. Or we can continue being fools’ agents, and stand by idly and ostrich-like (with our heads in the sand) as many did yesterday, while this system continues devouring, defiling and wasting land, resources, people, and the planet.

But in either case, capitalism’s day of reckoning is coming. And if we don’t act, we will share that fate alongside the greed-driven idiots who created this havoc. Remember the billions who’ve already suffered horribly and died – and continue to – at the designs of these madmen.

Now think of our children who will thank us for an inheritance of bones and ashes, of massive die-offs and unimaginable crises. The intensifying economic troubles, plagues, resource depletions, wars, unparalleled environmental and natural disasters we’re witnessing today, are but early warning signs of what’s to come.

The planet is on an independent course of exercising its own right to exist. And the wealthy know worse is yet to come. They know too that we have the collective power not only to stop them and right their wrongs, but to restore the balance between human society, and nature. But to do this compels stripping away their power, wealth, prestige, and influence. They know this too. And would rather watch the world suffer and die then give up what was never rightfully theirs to begin with. So they stand indifferent as always to the devastating effects of their system, driving us all “full speed ahead and damn the torpedoes”, while spreading conspiracy theories and apocalyptic culture to have us believe the doom they’re driving us towards is really the work of secret societies, aliens, or supernatural forces beyond our power to challenge, change, or correct.

Secret and supernatural have nothing to do with it! There’s a very natural, very open, and very human cause of our problems. And one can challenge, change, and correct. But there is also a time factor. It will take our collective effort, to first snatch these fools out of the saddle who dare hoard wealth and power without performing a day’s labor, and then smash their system, and rebuild an entire new one oriented towards meeting the needs of working people, the poor, and our environment. Otherwise we and our progeny will go “somewhere else”, but it won’t be on this planet or in this world.

As a Party of struggle, the New Afrikan Black Panther Party – PC is rooted in revolutionary optimism. We not only believe that a bright future is possible, but we’re committed to the united struggle to make it happen.

So we join with and aspire to arouse and organize all the world’s oppressed – and especially unprofitable – people to stay right where you are, to liberate the ground under your feet, and join together in consolidating it into a collective base of worldwide revolutionary resistance against capitalism and imperialism in the name of the people’s and the planet’s right to exist.

All Power to the people!