“The Crown is the absolute owner of land”. (Land Registration Act 2002) 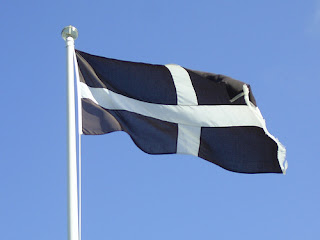 Flag of Kernow (Cornwall)
“The Crown is the absolute owner of land”. (Land Registration Act 2002)

This assertion of royal rights has been resurrected in the Land Registration Act 2002, intro. 4.). Although the Act does not specifically state: except Cornwall, where, the Duke of Cornwall (an unelected position) is Lord Paramount, it actually affirms that the Duke is exempt from the registration of land. (section 84, note 1...
35).

The European Convention of Human Rights provides at Protocol 1, included in the Human Rights Act 1998, “Every natural or legal person is entitled to the peaceful enjoyment of his possessions”. The threat of an absolute owner would appear to compromise ‘peaceful possession’ especially where it is accompanied by the absolute power associated with inalienable land rights and Crown immunity.

It might reasonably be assumed that to qualify as a democracy no one should be above the law. It addition it might be reasoned that Magna Charta had dispensed with Crown immunity as well as William the Conqueror’s claim to all land (Article 29 of 1297, a freeman’s right to freehold). The much vaunted attributes of Magna Charta have been tarnished by the fact that today the Duke of Cornwall, Heir to the Throne, is the beneficiary of a multiplicity of rights including inalienable property ownership and Crown immunity from prosecution. Government support is provided to hide the facts through the Duchy being given the ‘impossible’ title of a ‘private’ estate exempt from the Freedom of Information Act 2000, section 37. Censorship nurtures a culture of concealment arousing the suspicion that there is something incompatible with world public opinion, perhaps, even the suspicion of a secret constitution is aroused.

A decisive change in the 20th century towards secrecy is revealed by the position prevailing at the time of Sir Charles Dilke, the constitutionalist, who, on 18th March 1872, stated in Parliament, “There is not likely to be made today any attempt to contend that the Duchy of Cornwall is the private property of the Prince of Wales”. The current unacceptable level secrecy, it is contended, represents a retreat from transparency and an arbitrary denial of effective accountability.

The concepts ‘absolute owner’ ‘inalienable property’ and ‘crown immunity’ encourages the closed mind of awe and subservience to the feudal system. It is noted that Commonwealth countries have not been advised by the British government to opt for an unwritten fragmented constitution, crown immunity and the establishment of a look-a-like House of Lords.
Source: http://www.cornishstannaryparliament.co.uk/
Posted by nickglais on 11/05/2012 01:41:00 PM