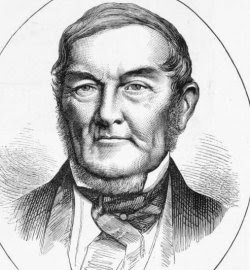 Here is a poem I wrote some years ago about how the 3rd/4th November 1839 uprising in Newport inspired the Blaina Rioters of 1935 in their battle against cuts in National,Assistance.

I fervently hope today's generation can take inspiration from 1839 and 1935 to battle the current cuts.

We truely stand on the shoulders of giants.

It's where our class was born

But its in Blaina that you spent your eary life

You were a Publican

And the People you did entrall

You told them of the Charter

And of the Rights of Man

But just words was not your vocation

You wanted democracy for your generation

If action it was needed

You would not be hesitate to meet the call

For you were Chartists all.

For leading them with Jones and Frost

In '39 they sentenced you to a hanging

- and to be quartered as well

- for Treason they did say

- for having organised a rising in Newport Town that fateful day

Zephaniah Williams you were a democrat so true

That not only Wales but all this whole Island misses you !

But they shipped you off to Australia without farewells they say

Transportation for Life was then the true democrats pay

But you were irrepressible - they could not keep you down

Your escapes they were legend

Until a pardon it was found

Then you became a Tasmanian Man

To the Public Bar you did return

Just like back in Blaina the Launceston people you did enthrall

At the UAB when the unemployment assistance they did cut

The spirit of Zephaniah Williams was enthused with fighting strength

For the Peoples strength knows no limit when its for right that they do fight.

There were 200 walking wounded on the hills that night !

They halted the unemployment cuts and the government they did cow

What a fighting spirit - but who knows it now ?

The country that gave us Zephaniah Williams

Needs that spirit in the Valleys once again !

The men of 39 and 35 are really Wales's hidden treasure

If Zephaniah Williams be our meaure

Someone said they had heard the spirit of Zephaniah Williams in a pub in Blaina just the other night.

You have heard the call - are you ready for the fight.

People they must learn they have to fight for their rights