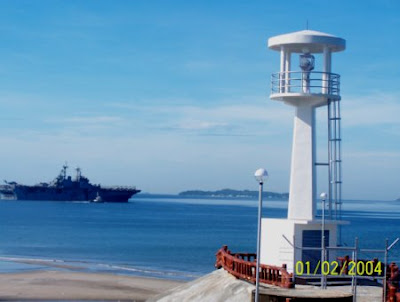 Executive Director Edilberto Adan of the Visiting Forces Agreement Commission confirmed plans to increase the number of "joint military exercises" and made proposals to "put back in harness" the Subic International Airport as a military airport in order to be used by US military forces.

CPP denounces plans to revert Subic to US military use

The Communist Party of the Philippines (CPP) condemned proposals by officials of the Aquino regime to refurbish the military facilities of the former Subic Naval Base in order to accomodate the growing number of visiting US troops involved in various types of US military operations in the Philippines.

The CPP issued its statement after Executive Director Edilberto Adan of the VFA Commission confirmed plans to increase the number of "joint military exercises" and made proposals to "put back in harness" the Subic International Airport as a military airport in order to be used by US military forces.

Until 1991, the Subic Naval Base was one of the biggest military bases of the US in the Philippines, servicing American warships, submarines and other military naval vessels. Riding on the crest of mass protests against the US military bases, the Philippine Senate voted that year not to renew the 1946 Military Bases Agreement (MBA), which resulted in the reversion of the Subic Naval Base and other American bases, camps and facilities to the Philippines. "The Aquino regime's plans to allow the US military to use facilities at Subic follows a longstanding promise made by the puppet government's officials in the Strategic Defense Dialogue with US officials since January of this year," said the CPP. "

"The US military seeks to gain access to Philippine seaports and airport facilities in order to use as them as stations for repair and resupply and provide rest and recreation for its troops." "The Aquino regime is shamelessly extending all possible accomodations to the US' military needs," said the CPP. "In doing so, it serves the US imperialist power-projection operations in the Asia-Pacific.

The US seeks to maintain its dominant presence and control of key sea routes to ensure the flow of US commodities to the Asia-Pacific market and put pressure on countries to further liberalize their economies." "By maintaining its military presence, the US also seeks to preempt the growth of potential military adversaries such as China and Japan, even as it still considers them strategic economic partners."
Posted by nickglais on 10/10/2012 12:01:00 PM