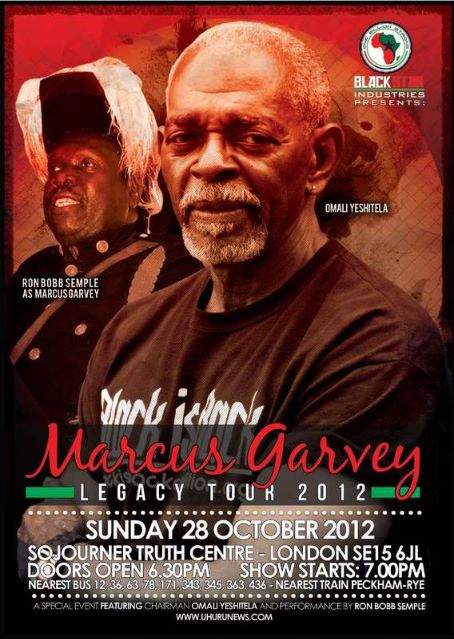 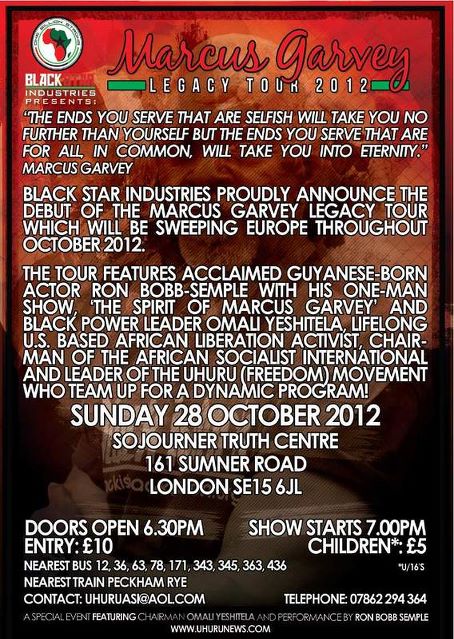 Omali Yeshitela is the founder of The Burning Spear newspaper, the only black power journal in continuous existence since 1967.  He leads numerous campaigns and organizations representing the interests of African people inside the U.S., Africa and around the world.  Known as an electrifying and enlightening lecturer, Yeshitela speaks to enthusiastic audiences the world over.

Bobb-Semple’s powerful portrayal of the brilliant early 20th century black leader, Marcus Garvey, is coupled with the fiery presentations of Yeshitela, whose work to unite Africa and African people worldwide today seeks to make a reality of Garvey’s dream of “Africa for Africans, those at home and those abroad.”

The Marcus Garvey Legacy tour shows that the aims of the Jamaican-born and Harlem, New York-based Garvey, who built an organization of 11 million Africans worldwide in the 1920s, are more relevant to today’s world than ever before.
This is not simply a nostalgic look at the work and times of Garvey; the goals of this tour are to show that the spirit of Marcus Garvey is alive and well in a time when the majority of African people everywhere continue to struggle to overturn the poverty and oppression resulting from colonialism and slavery.

This program has already been performed and enthusiastically received at the ancestral home of Garvey in St. Ann’s Bay, Jamaica; aboard cruise ships in the Caribbean and at the Akwaaba Hall in St Petersburg, FL, where it received a standing ovation.
Posted by nickglais on 10/09/2012 11:10:00 AM