Wales : Cilmeri 2012 To What Purpose Now More Pomp Posing and Parading or the beginning of Struggle ?

Plaid Cymru President Jill Evans subject of Criticism in Media over participation in Cilmeri water ceremony above in 2011 here :

Most interesting regards this is the Patriotic Fringe Response , so sad and soppy in their 'Wimpish Worries' as to what Shipton writes and oh dear their patriotic 'Medieval Memories' being attacked by the Labour Party. All going to prove just how much this Patriotic Fringe as totally lost the plot regards what Rali Cilmeri was founded for by the Patriotic Front and what both Cofiwn and Y Cyfamodwyr used it for, as a Radical Nationalist platform from which to launch some real radical Nationalist Struggles as against Investiture'69, Sarhad'83 and not my bag really but for Y Cyfamodwyr it was. Am talking of course 'Mewnlifiad' and an issue again on the horizon as 'Affordable Housing' the major concern of an 'Alternative Nationalism' increasingly moving to the right and reactionary Patriotic Politics as of the RCA and Jac O' North which Rali Cilmeri might just become the platform for, keeping in mind that last year for first time ever some really racist songs were heard at Tafarn Llywelyn after the annual posing and posturing at the Cenotaph! No! No! the way forward not the expected and called for knee jerk reaction but now is time to get off the fence and call for a real start of a fight back! Fighting back against Tory Cuts, Unemployment and Depopulation and not least against the new Colonialism of Cheque Book Conquest Land Grabbing of the Renewables Robber Barons, Green Carpet Baggers and all TAN 8 TREATY TRAITORS and that Includes Plaid Cymru and it's companions Y Crachach Newydd - England's Client Tribe in Wales.

Patriots really is time to become Partisans, you will be more service to yourselves, your Communities and Country if you now stopped all the pathetic pitiful retro response that now distracts you and diverts effort to some real, I said real not fbf stuff but real STRUGGLE and you do not have to look far as to where to begin such STRUGGLE but now more than ever possibly on your doorstep at the WINDMILL PLANTATION CLOSEST TO YOU AS A FEW HAVE BEEN DOING ON MYNYDD Y BETWS ALL YEAR AROUND - Whilst What have you been doing and will more than likly not be doing over the months ahead up to
Rali Cilmeri?
http://stryveland.blogspot.co.uk/2012_10_01_archive.html

As one of the original founders of Rali Cilmeri in the 'Sixties', I would like to make a few points as to it's history and as to my bemusement over the arising bother about what Patriots get up to once a year at this commemoration. But first, lets deal with the FWA and White Eagle Cross association with regards to Rali Cimeri in the past and present. In the past, as from Adfywiad Gwladgarol 1962 - 69 and over the years, depending on who was organising Rali Cilmeri, the use of such Radical Nationalist 'militant' symbolism has had major or minor role and significance. In the 'Sixties' Rali Cilmeri, founded by the Patriotic Front,came to be the annual rallying ground of all those who opposed the Investiture as, in particular, the FWA and many other Nationalists - including a great many Plaid Cymru members (and certainly those of it's Youth Association) some CYIG members, as well as the Celtic League. 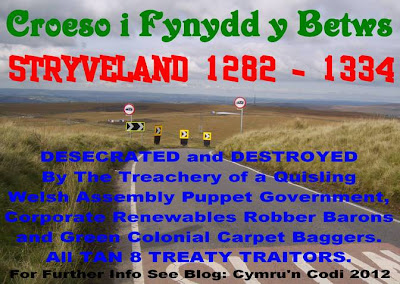