One in five workers in the UK – some 4.82 million people – are paid less than the ‘Living Wage’, new research from accountancy firm KPMG

The research finds that Northern Ireland has the highest proportion of people earning below the Living Wage at 24 percent, followed by Wales at 23 percent

For Welsh Readers that means 250,000 people in Wales are below a living wage. 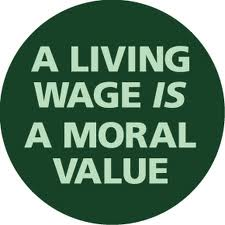 One in five workers in the UK – some 4.82 million people – are paid less than the ‘Living Wage’, new research from accountancy firm KPMG shows today. In a difficult climate of rising prices and increasing costs of living, the impact is falling hardest on these low paid workers with over four in ten saying that their finances are worse now than they were just one month ago.


The Living Wage is a voluntary rate of pay that some employers give their staff, designed to enable workers to afford a basic standard of living. The rate is currently £8.30 an hour in London and £7.20 outside. This compares to the national minimum wage rate of £6.19 an hour. The research indicates that since 2001, the Living Wage campaign has positively impacted over 10,000 employees and their families, and redistributed over £96 million to some of the lowest paid workers in the UK.


The research, commissioned by KPMG from Markit, provides one of the most comprehensive insights yet compiled into the Living Wage issue. Combining analysis of the Office for National Statistics’ Annual Survey of Hours and Earnings with Markit’s own highly respected Household Finance Index survey, the research reveals both the extent of sub-Living Wage employment and the effect it has on those low paid workers.


The research is published ahead of Living Wage Week (4-10 November) when new rates for London and the rest of the country will be announced.


By job type, the research indicates that the activities with the highest proportion of workers paid below the Living Wage are bar staff (90 percent) and waiters/waitresses (85 percent) – though by number of workers the most affected people are sales and retail assistants.


KPMG’s research shows that, whilst financial confidence is generally low across the whole survey population regardless of income, it is especially pronounced among those who earn less than the Living Wage.


Commenting on the findings, Marianne Fallon, Head of Corporate Affairs at KPMG, said: “This research really lays bare the extent of the problem of low pay in Britain. Times are difficult for many people, but of course those on the lowest pay are suffering the most. Paying a Living Wage makes a huge difference to the individuals and their families and yet does not actually cost an employer much more. At KPMG, we have found that the improved motivation and performance, and the lower leaver and absentee rate amongst staff in receipt of a Living Wage means that the cost is offset and paying it is the right thing for our business.


“With Living Wage Week fast approaching, we would urge more big employers to consider paying their staff a wage that means they can afford a socially acceptable quality of life. We think it is the responsible thing to do.


“Tackling in-work poverty is also vital if we are to enable more people to improve their life prospects and increase social mobility in this country.”


Rhys Moore, director of the Living Wage Foundation, said: “Paying a Living Wage makes a huge difference to the quality of life of thousands of cleaners, caterers and security staff across the country. It is really encouraging to see nearly 100 organisations now signed up and accredited. But that still leaves many more organisations that aren’t. We hope that Living Wage Week will create real momentum and that many more employers will sign up.”

The Markit Household Finance Index survey was carried out between 11 and 15 October 2012 amongst 903 respondents in employment.

The Office for National Statistics’ Annual Survey of Hours and Earnings for 2011 was based on approximately 190,000 returns and related to the pay period which included 13 April.

Further information on the Living Wage and Living Wage Week is available at www.livingwage.org.uk 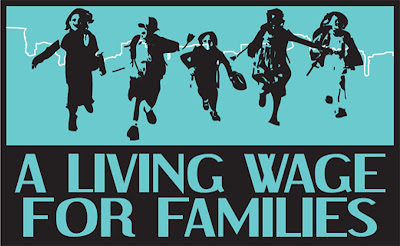