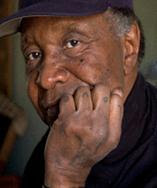 Brother Robert King (Angola 3)
Collectively, the Angola 3 - Herman Wallace, Albert Woodfox and Robert King - have spent over 100 years in solitary confinement in the biggest prison in the U.S, a former slave plantation known as Angola, for their activism against the conditions in the prison as members of the Black Panther Party.
Robert King is the only freed member of the Angola 3 and continues to fight for the freedom of Herman Wallace and Albert Woodfox who remain incarcerated after some 66 years, even though extensive proof of their innocence has been established.