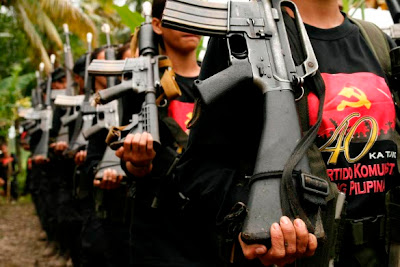 The Communist Party of the Philippines (CPP) today denounced as an outright violation of Philippine national sovereignty the docking of another US nuclear attack submarine at the former US naval base in Subic, Zambales.


The USS Olympia (SSN-717), described as a Los Angeles-class nuclear attack submarine, docked yesterday at Subic. It is the fourth American naval vessel to have have docked in Manila and Subic over the past two months. The USS North Carolina and USS Hawaii, both nuclear submarines, and the naval warship USS Milius and submarine tender USS Frank Cable have successively docked in Philippine ports since August.

"The increasingly frequent dockings of American naval warships in the Philippines mark heightened US military presence and intervention in the Asia-Pacific region," said the CPP. "In collaboration with the Aquino government, the US has been using the Philippines as one of its military outposts in launching interventionist operations, and for refuelling, resupply and the rest and recreation of its military personnel."

The CPP also denounced the ongoing PHIBLEX military exercises being held in various parts of Luzon involving 2,600 US and 1,200 Armed Forces of the Philippines soldiers. "The US military has been using these joint military exercises and so-called 'humanitarian assistance and disaster response' operations in order to continuously deploy thousands of American soldiers in various parts of the country."

American troops have been arriving in the Philippines since the first week of September and are scheduled to stay until October 18. American soldiers have maintained their presence in Zambales, Palawan and Cavite over the past few weeks.

"At any given time, the US military has thousands of military personnel in the Philippines, most of which are permanently stationed in the Joint Special Operations Task Force (JSOTF-Philippines) headquarters inside Camp Navarro in Zamboanga City," said the CPP.
Posted by nickglais on 10/05/2012 03:17:00 PM