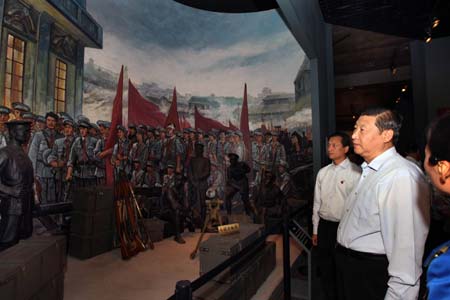 Mr. Bo's takedown indicates consensus among Chinese leaders to push ahead with economic liberalization despite growing social problems, said Minqi Li, an economics professor at the University of Utah, who's takedown is aligned with new leftists in calling for more-egalitarian wealth distribution in China.


"The basic message for every layer of government official is that they try to please higher-ups and forget trying to create anything that is positive in the sense of contributing to the livelihood of local people,"

said Mr. Li who helps run redchinacn.net, a popular Maoist website that has been outspoken about Mr. Bo's case.


"In the next few years we could see an acceleration of the various contradictions and the problems and the economic-social crisis," he said.

Many protesters said in interviews the demonstrations were also a way to express dissatisfaction with what they see as weak party leadership and Beijing's inability to protect China's interests.


In the past three decades, China's economic reforms were little questioned amid double-digit growth and dramatically rising living standards. But during the global economic crisis the new leftists gained a growing voice, according to analysts who have studied the movement.


The new leftists have called attention to a widening wealth gap, government corruption and what they see as exploitation of cheap Chinese labor, raising questions about the effectiveness of current leaders and whether the party has drifted too far from its founding principles. Such questions come as the party prepares for a once-a-decade leadership transition beginning Nov. 8.


As a charismatic politician and onetime candidate for top office, Mr. Bo served as the new left's most powerful champion. From the southwestern city of Chongqing where he served as party chief from 2007 until March 2012, he launched popular social programs to help the city's poor, promoted an aggressive anticorruption campaign and restored Mao-era traditions like the singing of red songs.


Mr. Bo was removed in March from his Chongqing post and subsequently expelled from the Communist Party on Sept. 28. He is likely to face trial on charges of corruption as well as abusing his power during a murder investigation against his wife, Gu Kailai. Ms. Gu in August was convicted of murdering British businessman Neil Heywood at a hotel in Chongqing in November.

But his advocates maintain sway online, where many use Sina Corp.'s popular Twitter-like Weibo microblogging service. New-left activist Sima Nan, who has more than a half-million followers, uses the forum to regularly discuss Mr. Bo's case.


It is unclear how extensively popular Maoist websites have been targeted by China's censors as a result of the Bo case. The University of Utah's Mr. Li said the site he works with, redchinacn.net, was first targeted by hackers beginning in mid-March. After Mr. Bo was dismissed from the Politburo in April, leftist websites including his were shut down completely, he said. Mr. Li's site quickly relaunched overseas. Government officials haven't commented publicly about closing any websites.


On Sept. 29, a day after Mr. Bo was expelled from the party, the party-run Guangming Daily newspaper published a commentary on its website saying Mr. Bo's fall ensured the country would never experience another Cultural Revolution, a period of political and social chaos lasting from 1966 to 1976.


Mr. Han, the new-left advocate who slapped the elderly man in September, published an online essay in response a few days later. The essay—widely republished on leftist websites and apparently left alone by China's online censors—argued that the Chongqing model under Mr. Bo simply set out to fight corruption and to better entwine the party with common people. Top leaders' and state media's praise for Chongqing in the years before Mr. Bo was fired was proof that Chongqing's programs hadn't previously run afoul of the party, he wrote.


Mr. Han became the subject of national debate after his scuffle with the old man on Sept. 18 outside Japan's Embassy in Beijing where thousands had massed over the course of days to pelt the fortress-like building with eggs and plastic water bottles.


According to a statement by Mr. Han posted online, he was chatting with young protesters who carried a sheet with characters proclaiming they missed Chairman Mao. He said an old man approached and began cursing the former chairman. Mr. Han retorted the old man was a traitor, and slapped him across the face, the statement said.


Mr. Han declined to be interviewed, and the old man's identity wasn't known. Mr. Han's actions toward the old man were widely criticized in China, though Mr. Han has responded defiantly. Hearing someone bad-mouth the country's founder was more than he could bear, his statement said.

Democracy and Class Struggle says these extracts from an article in Wall Street Journal confirms our view that the ascent of Xi Jinping will accelerate contradictions in China and not solve them.