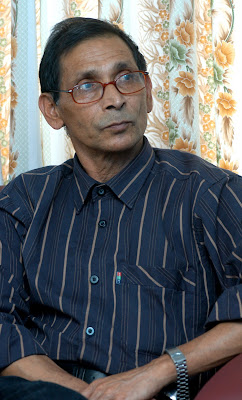 This interview was originally posted in Nepali on weeklynepal, an online Nepali news portal, then translated into English. There is a minor edit for clarity.

Are you an anti-India leader?

I’m not anti-India but inimical to the Indian oppression and hegemony. I’m not against India and the normal Indian people. Those who call me an anti-India are seriously flawed. We are internationalists and patriotic at the same time. Therefore, we have no antagonism with India and the normal Indian people. Our belief is that Nepal should not face Indian oppression. Alongside this we have opposed Nepalese puppets as well.

Who are the puppets in the nation, today?

Nepal is a semi-colonial and semi-feudal country. Post WW-II, the usual practice of direct colonisation has come to an end. In these modern days oppression and exploitation is widely maintained by inducting domestic puppets within oppressed nations itself.

Has your protest against India benefited Nepal?

Lets not take the issues that we have raised as simple as a protest. There are problems, how this government will act upon to solve these problems is the principle theme. CPN-M is a political party. We have raised issues through surfacing the problems. In the past Baburam had raised the same issues himself. If there are problems, they need to be resolved. Now, we still need to see what happens between Indian oppression and the Nepalese government. We come across problems almost every day, like the border encroachment, removal of original border pillars, installation of new border pillars in wrong places etc. Don’t we need to look at these things?

So a protest against India will resolve the problem?

We have not just opposed India. We have opposed the Indian oppression as well as its Nepalese puppets. This is an opposition to the Nepalese government as well; or else let the government resolve the problems or warn Indian expansionism. We have problem of unregulated vehicular movements, revenue and custom etc. These are issues that need to be resolved.

If so, vehicles with Indian registration number are not to be allowed to operate in Nepal?

They can be operated but has to be regulated under the norms. Norms must not be violated; legal process has to be maintained. In places vehicles with Indian registration number enter and exit Nepal without any restriction, shouldn’t the government regulate that? Let them enter through the correct process. Legal procedure has to be maintained. It has been too much! It is not just the problem of vehicles, there are other problems too. But, this prohibition cannot be for forever.

There is a pressure from all around to withdraw this decision, will it be withdrawn?

Don’t talk about the withdrawal of the decision; we want to see the problem resolved at the outset and then we shall talk. This is what we have said to the government. Forget about pressure! Entrepreneurs have interpreted in their own way, which is also correct. But, the interest of the normal Nepalese people is that the national sovereignty of Nepal has to be safeguarded and respected. Please don’t just talk about the vehicles, why was upper-Karnalee and Arun-III handed over to India by deceiving the parliament? Even the Koshi high dam project has been handed over to India without consulting anyone. The puppets here are doing all the wrong things.

For that the government has to be opposed, can it be sorted out by opposing India?

We have been opposing the government as well. Now everyone has to come forward in this issue to seek a solution of the problem. The patriotic forces also have to come forward. Do we not have people and a law? How can they do whatever they like, ignoring everyone?

The President of Nepali Congress has also said that your decision needs to be withdrawn?

Whoever says that this decision has to be withdrawn, needs to have an ability to forge the solution of this problem too. We stand on the side of resolving these issues, not for an antagonistic rivalry.

What should be done so vehicles with Indian registration number can be operated in Nepal without any restriction?

Vehicles with Indian registration number can only operate as needed in Nepal, not without any restriction. Very few Nepali number plated vehicles can operate in India, so there needs to be equality there. The incumbent Prime Minister, Baburam Bhattarai had raised these issues in 1996 himself. But, the problems are still as they were then. Nepal has changed a lot since but these problems are still here. I have heard that the government has vowed to take action against us! Should the government take action against us or seek a solution to the problems?


There are allegations that you are enforcing your party’s agenda for publicity stunt?

Nobody does anything such for publicity. The problems are very serious; we have raised these issues to rectify them. In our country the leaders have become such puppets, forget about the issue of vehicular movement, the border pillars are being removed almost every day, why are these leaders silent on this issue?
Should the solution not be sought diplomatically?

They do everything without any due respect to Nepal and the Nepalese, don’t they have to approach diplomatically? So should we oppose this or not?
Are you ready to fight India?

We are not yet ready to fight. We want to approach diplomatically as well. We want to utilise every other methods at the earliest. This is a voice of our protest; every patriotic person needs to listen. The government has to listen as well and come forward to find a correct way to resolve this issue.
What happens if your concern is not taken seriously?

What happens if our concern is not taken seriously – leave it for the moment! We will certainly think about it. This is an issue of national sovereignty of our nation.
It is believed that your struggle is an outcome of a thought that protesting India is meant to be greatly patriotic?

Don’t talk just about being patriotic. At the moment, the biggest export, import trade is with India. The economy of our country is fully dependent upon India. We appreciate a cordial relationship between these two countries. However the matter of diplomacy, that is the responsibility of the government – we are not in the government. We have been saying from within our country – why is there Indian intervention in our internal matter. We are not protesting India from within India, are we? We respect the national sovereignty of India, but our voice must be heard. Our principle is that a bigger nation should not dominate a smaller nation.
India had assisted you during the 10 years long insurgency, hadn’t?

Yes, but I believe that it didn’t have to be done in such a way
.
Is a journey of consensus in Nepalese politics about to begin?

There has to be a consensus. Consensus is a necessity at this moment. But for this Baburam has to resign and pave the way to form a unity government.
What if the Prime Minister doesn’t resign?

If he doesn’t resign, he will be ousted through a struggle. If the people can overthrow a monarchy that ruled for over 240 years, who is Baburam? Morally Prachanda seems to be well above Baburam. I’m surprised why Baburam doesn’t resign even in such a turbulent situation.
How should the agreement be forged?
Baburam has to resign first and pave the way to form a unity government. After that we have to move forward by forging agreement on all contentious issues through multilateral roundtable conference.
Is there a possibility of party unity?